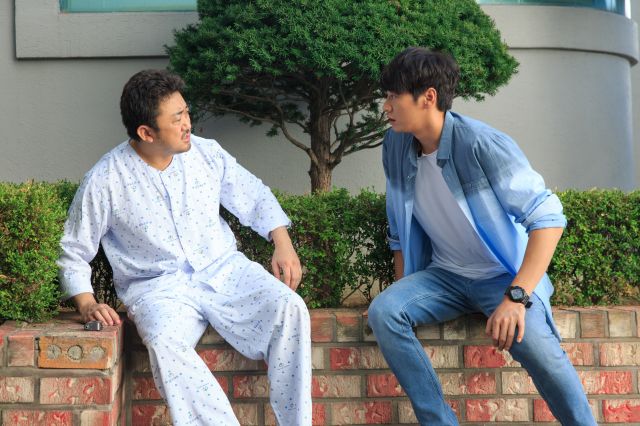 Going by promotional materials one would probably be inclined to think of "The Soul-Mate" as being a typical supernatural odd couple buddy cop comedy. Jang-soo (played by Ma Dong-seok) is a beefy middled-aged judo instructor. Tae-jin (played by Kim Young-kwang) is the currently incorporeal young cop who only Jang-soo can see. Together, they fight crime. In actuality Jang-soo and Tae-jin spend a ridiculous amount of time engaging in petty bickering before the ghost thing comes up at all.

More than the petty personality clash Jang-soo and Tae-jin have wildly differing life philosophies. Tae-jin became a cop to catch bad guys, however much the extra work greatly annoys his fiancé, fishmonger Hyeon-ji (played by Lee Yoo-young). By the way "The Soul-Mate" takes place in a minor town on South Korea's western coast- which is relevant considering the equally petty small scale nature of the criminal gang Tae-jin brushes up against.

Note how I only mention Tae-jin. The gang isn't really Jang-soo's problem, and he's reluctant to get involved with Tae-jin's problems even though the big man often wears a big gaudy shirt with "Justice Always Wins" highlighted on the back. It's quite awhile before we find out just why it is that a big tough guy with an impressionable and adorable young daughter is so reluctant to set a good example- although the explanation, when it comes, is pretty good.

That's the main conflict. Tae-jin is a static and frequently boring character who's oddly disconcerted with the likely prospect of his immediate death. It doesn't help that Lee Yoo-young, in stark contrast to Kim Young-kwang, is much better at emoting grief. Jang-soo is the one with a serious character arc, as he contrasts Tae-jin's plight to his own. In reality all of us are living on borrowed time- and what's significant about Tae-jin is that he stubbornly insists on trying to solve the case in spite of that.

This thematic point is also highlighted in subplots with Tae-jin's fellow officers. But all this narrative analysis is a bit far afield. "The Soul-Mate" really is just an affably goofy comedy where Jang-soo and Tae-jin bounce off of one another. There aren't really solid punchlines here so much as there are a lot of smile-worthy moments. That goofy gag of extras watching perplexed as Jang-soo yells at someone they can't see is done just often enough to feel fresh, even if it's an extremely obvious joke for this kind of genre comedy.

"The Soul-Mate" is not an especially slick production. This movie has to rely on charm, chemistry, and good old-fashioned unambiguous moral values to carry the day. So I'm honestly surprised I liked it as much as I did. The whole conceptual idea of this movie veers dangerously close to corniness and the script runs perilously close to obvious plot holes about how exactly the whole ghost thing even works. But you know what? I liked that Tae-jin moves on from his cynicism to make the world a better place. That kind of warm fuzzy feeling beats aesthetics every time.

"The Soul-Mate" is directed by Jo Won-hee-I and features Ma Dong-seok, Kim Young-kwang and Lee Yoo-young.