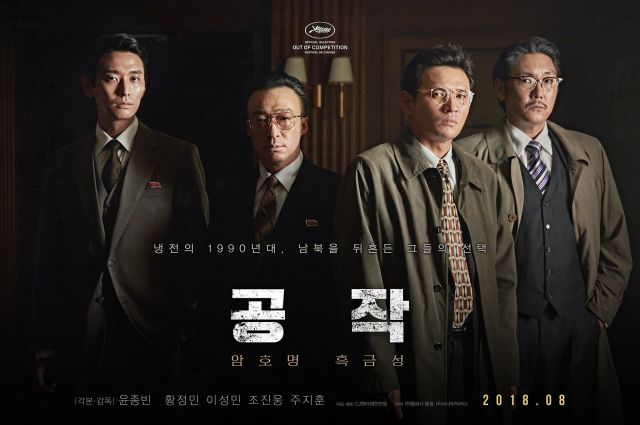 Director Yoon Jong-bin wastes no time in having National Intelligence Service administrator Hak-seong (played by Cho Jin-woong) bully former intelligence operative Black Venus (played by Hwang Jung-min) into infiltrating the North Korean nuclear weapons program. "The Spy Gone North" takes place some twenty years ago, so the veracity of Hak-seong's nuclear tip is questionable from the very beginning. But the bigger problem is that Black Venus's cover story of engaging the North Korean government in trade deals starts to take on greater importance than his actual mission.

That irony is what underscores "The Spy Gone North" as an espionage thriller. Every single scene where Black Venus has to interact with North Koreans is loaded with tension, since if his true identity is discovered, Black Venus will almost certainly be murdered. The North Korean characters are supremely paranoid, and for good reason. They know full well what men like Hak-seong are capable of, and don't believe for a moment that capitalists are capable of truly noble motivation.

But the communists..? Well that's actually surprisingly ambiguous. "The Spy Gone North" takes place during The Long March, with famine and starvation being the norm. In one of the film's more disturbing scenes Black Venus sees this firsthand. Yet rather than coming off as a condemnation of the North Korean regime, here the tone is very much...why does the nuclear weapons program matter so much again? Nominally, at least, the North Korean characters are trying to resolve their awful domestic situation.

The South Korean characters can't be as easily defended. At multiple points we see Hak-seong sabotage his own long-term intelligence operations for dubious short-term political purposes. It becomes a bit galling, after a point, how Hak-seong treats North Korean authoritarianism as an existential threat, yet sees no contradiction in his own actions to prioritize the political power of the National Intelligence Service over South Korean voters.

So it is that scenes featuring North Korean leader Kim Jong-il (played by Lee Sung-min) have a reverberating spooky quality. It's not just because Lee Sung-min is suitably terrifying in the role, but because we can also guess how his South Korean counterpart can be similarly manipulated. The main qualification for being a good spy is being a good liar, and a sufficiently consummate liar will use that skill at all times even with alleged allies.

Or for that matter, himself. The long-winded justifications the more sinister characters in "The Spy Gone North" use to justify their actions are in their own way merely complex lies they tell themselves. It's awfully convenient, after all, how the national interest and their personal interests manage to coincide perfectly. So it is that Black Venus's lack of competing interests allows him to see the situation the most clearly and take the biggest risks in the name of an actual greater good. Take note that Black Venus is based on a real South Korean spy- an unlikely hero, given the reward we see him being given in the postscript, but the one the Korean peninsula needs.