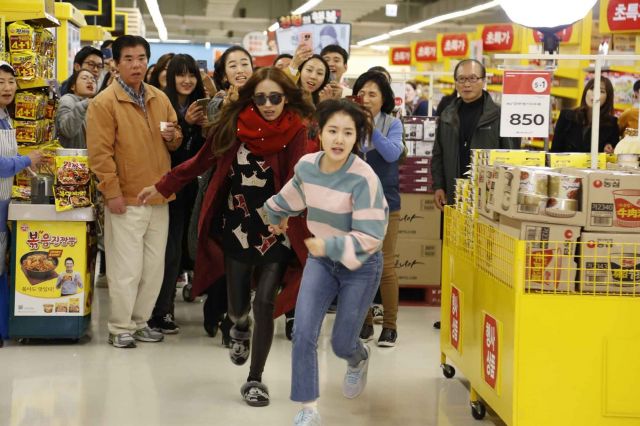 So-eun (played by Jin Ji-hee) is a normal teenage girl who does normal teenage girl things like gossip with her friends about handsome celebrity Ji-hoon (played by Im Seulong). Lately, their main source of resentment is middle-aged celebrity Hye-mi (played by Han Chae-young) who has taken Ji-hoon off the market in spite of the fact that she's obviously too old for him. The twist? Apparently Hye-mi is So-eun's mother.

I use the word apparently there because "The Star Next Door" takes a lot longer than you'd think to clearly establish this basic and essential aspect of the plot. Even though Hye-mi walks in and out of So-eun's apartment on random whims, she is never addressed as or acts like So-eun's mother. The main matriarchal role goes to So-eun's own mother (played by Kim Bo-mi) who has to lecture So-eun and Hye-mi like they're a couple of spoiled sisters.

Though the initially unclear premise is an obvious flaw, it also illustrates the main strength of "The Star Next Door". It establishes how the relationship between So-eun and Hye-mi is badly strained, and more importantly, how the whole Ji-hoon issue is mostly just the latest indignity. It's bad enough that Hye-mi is never around, and now she's invading So-eun's fantasy world too. So-eun is well-meaning but fantastically clueless, which makes her sympathetic enough as the two butt heads.

While the chemistry between Jin Ji-hee and Han Chae-young is excellent, unfortunately the same cannot be said for Ji-hoon, who is a surprising non-character considering his relationship with Hye-mi is the immediate source of So-eun's angst, and also ends up being key to the resolution of the overall conflict. Which involves, uh, controversy about Hye-mi's career or something. At least, that's why Im Hyung-joon is always skulking around. He wants the big scoop, and Hye-mi's secret daughter is a pretty big one.

Framed like this it's obvious that Hye-mi has to resolve the story by proving she loves So-eun more than her job. The problem is, it's never totally clear that Hye-mi ever loved her job in the first place. Honestly I'm not totally sure what her job even is. I mean yeah, Hye-mi's an actress, but who did she practice lines with before getting the idea to try with her own daughter? Was the move-in recent? What kind of relationship does Hye-mi have with her family and co-workers?

It's bizarre thinking over "The Star Next Door" and realizing it never answered any of these pretty fundamental questions about the worldbuilding. The situation comedy style fights between So-eun and Hye-mi take such prominence that "The Star Next Door" never gets around to basic exposition about their personal situation or their relationships to any other character. In a sense I'm a little impressed that the movie managed to do that. Still, for purely aesthetic purposes, all "The Star Next Door" has going for it is the occasional decent joke, and that's just not enough to cover for how comically bad it is at the foundational level of storytelling.

"The Star Next Door" is directed by Kim Sung-wook and features Han Chae-young, Jin Ji-hee and Im Seulong.

"[HanCinema's Film Review] "The Star Next Door""
by HanCinema is licensed under a Creative Commons Attribution-Share Alike 3.0 Unported License.