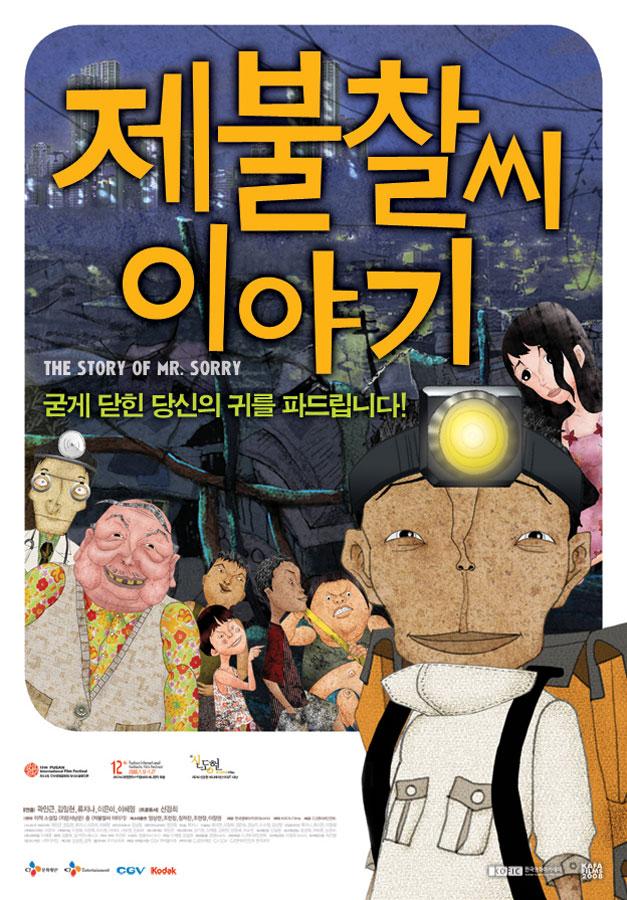 There's a voyeuristic element to reality television that we're often loathe to recognize. In the worst dregs of the genre, desperate people act deranged for our entertainment. Normally, when this shows up in satire and social commentary, it's an indictment of our shallow entertainment culture- but never of smart, cool people like us, who only watch this kind of stuff so we can laugh at how dumb it all is. "The Story of Mr. Sorry" doesn't let us off so easily, and forces the so-called "intelligent" commentator to acknowledge how involved we really are in this circus.

We start off at the typical crazy reality TV show concept taken to the extreme. A prominent politician has been driven insane and the only suspect, a spider found at the scene of the crime, is on trial. The viewers at home are to decide the spider's ultimate fate. This whole premise is demented and ridiculous. It quickly becomes besides the point, though, as Mr. Sorry (voiced by Um Sang-hyun) is the only one who knows what really happened. And soon we're covering the story of his recent life.

Mr. Sorry is a personal hygienist. He's not a particularly good one. Potential customers respond to him with a great deal of agitation, and his personal life isn't terribly great, either. But his circumstances undergo a major turn-around after an especially bizarre event results in him becoming the most famed and expert specialist of his kind. He rides the fame and wealth to great acclaim- but what really keeps him going is that his new cleaning method allows him to discover the deepest, darkest secrets of his customers.

Suddenly, that life of Mr. Sorry's which had seemed so pathetic doesn't seem anywhere near that bad. The secrets Mr. Sorry uncovers in the line of his work become increasingly dark and disturbing, and he stands with a sympathetic solid detachment. And for awhile, we're right there with him as the audience. These secrets confirm all the worst that we want to see in our fellow human beings. But it's not long before they start to go too far- and it becomes an open question how much of these secrets are genuine darkness and which are being distorted by Mr. Sorry's aloof context.

I came into this film expecting the execution-based reality TV show to be the focus, but its main contribution to "The Story of Mr. Sorry" is to provide an uncomfortable parallel to the title character's own adventures. By the end, the result of the trial is almost irrelevant. Just another convenient construction that secures our position as the observer of the observer without letting us acknowledge our own roles in the media frenzy.

"The Story of Mr. Sorry" is not for everyone. The animation is weird and unsettling. Its overall theme is extremely meta in construction and goes much deeper than the typical shallow skewering of television culture. There's little in the way of explanation for any of the fantastic events that happen. But all of this is essential to the point. "The Story of Mr. Sorry" represents the most serious commentary of modern television culture I've ever seen. It's essential watching to anyone who considers themselves to be an expert on such matters, and is well worth the time invested for film or animation fans who want to see the genre stretched to its limits.

"[HanCinema's Film Review] "The Story of Mr. Sorry""
by HanCinema is licensed under a Creative Commons Attribution-Share Alike 3.0 Unported License.