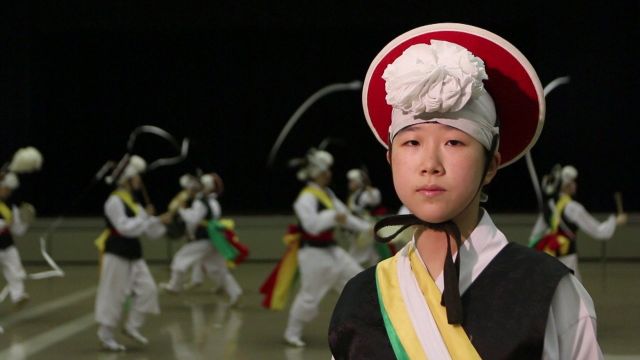 In Japan there is a massive countrywide cultural performance competition for high school students. Ethnically Korean Japanese schools also participate, although their definition of cultural performance differs somewhat from those of their Japanese peers. Kunkuk High School, located in Osaka, has an especially intensive program, and have consequently been chosen to represent Osaka in the thirty-fifth annual competition. "The Summer in Ibaraki" is their story.

Instead we're treated to fleeting glimpses of Kunkuk's preparation for the competition, and also the home life of its students. While taking the basic format of a team sports story, the lack of context makes it difficult to identify with the Kunkuk students. While you may have been a part of a competitive high school group and taken that group extremely seriously, you can't reasonably expect anyone who did not go to your high school to care about that. Plenty of people who did go to your high school didn't care, either.

So when "The Summer in Ibaraki" starts to push the Kunkuk team as being great simply by representing Korean culture, it doesn't resonate. Most foreign viewers are likely to be frustrated how the documentary makes little to no effort to explain what the Korean traditions are or where they came from. It's irritating that "The Summer in Ibaraki" squanders the chance to give good information on the subject when the central motivation of the Kunkuk group itself is to spread awareness of traditional Korean culture.

The pointless narration deserves a lot of blame as well. I don't want to be too harsh on narrator Park Chul-min. It's not like he wrote the script. But his delivery is constantly even with only the most minor inflection. It's like we're watching a nature documentary, except that the students can and frequently do talk directly to the camera, so what's the point of just talking about what they're doing all the time when we can see it for ourselves?

"The Summer in Ibaraki" isn't really aiming for filmic quality anyway- produced in large part by MBC, the obvious intent is just give a picture into the life of overseas teenage Korean patriots without making intruding commentary on the fabric of their overall lives. While I can understand and appreciate the intent, and even see why some Koreans might be interested in the story here, ultimately "The Summer in Ibaraki" doesn't even give us a good look at the final performance. It's a bad introduction to the subject matter, and I can't recommend it for the typical reader of this review.

"[HanCinema's Film Review] "The Summer in Ibaraki""
by HanCinema is licensed under a Creative Commons Attribution-Share Alike 3.0 Unported License.