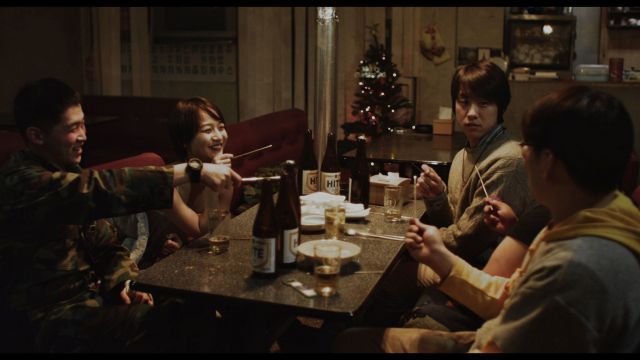 This is a movie about a road trip. Not a very good road trip, given that there's not really anywhere to go, but the characters don't know that. When Min-wook (played by Kim Chang-wan) and Sang-won (played by Shim Hee-sub) set out, there's genuine joy. It's just exciting for them to be out on their own admiring the snow draped scenery of the Korean mountains, and listening to cassette tapes, because this is 1999.

Yes, that's right, "The Sunshine Boys" is another film from the tradition of 90's nostalgia. But rather than taking its cues from pop culture ala "Answer Me 1994", this movie instead focuses on those objects of the near past people did not have access to. Namely cell phones. Nearly every conflict that arises in the film is a direct result of characters not being able to easily directly contact each other.

A Tamagotchi does make a brief appearance, though, and with it several other basic themes of awkward young adult humor. Our main characters are all roughly college age and look at the world with bright-eyed optimism. The tone of slowly seeping reality is settled early on, though. The third young man, Seung-joon (played by Ahn Jae-hong) is currently undergoing mandatory military service. The toll it's taking on his psyche is not immediately obvious, but it's rather hard to ignore given the fruitless efforts he undergoes to reconnect with his girlfriend via phone booth.

Seung-joon's cause is a hopeless one, and his friends know this. So they desperately try to keep the good times rolling, and their efforts work. Kind of. Friendship can be a great life-affirming thing, but unfortunately it can't ebb the tide of reality. What at first seems like a grand excuse for a gay old time slowly starts take on disappointing dimensions. There's only so much fun to be had from frolicking in the snow.

"The Sunshine Boys" is a movie about remembering the good times- but it's also about remembering that the good times existed to a large extent only in our own imaginations. The question naturally comes up- should Min-wook and Sang-won have just given Seung-joon the letter as soon as they could? Would that have been better than trying to force a night of fun, pretending like their lives are constant, unchanging, and will always be filled with that wonderful ray of sunshine?

Well, that's really a matter of personal opinion I suppose. This is a funny movie, and while there are some darker elements for the most part everything ends up all right in the end. But it's not the ending that matters- rather the journey that took our characters there to begin with. It's difficult to say what Seung-joon's takeaway from this adventure has been. But to Min-wook and Sang-won the reality of what happened is pretty inescapable. Adulthood, and the responsibility that comes with it, isn't something they can escape. At least there was that one entertaining evening. Maybe some day it will become an amusing anecdote as to the yesteryear of 1999. But in that final scene, it's a merely a weight holding these two down, lucky they can get back up and keep going.