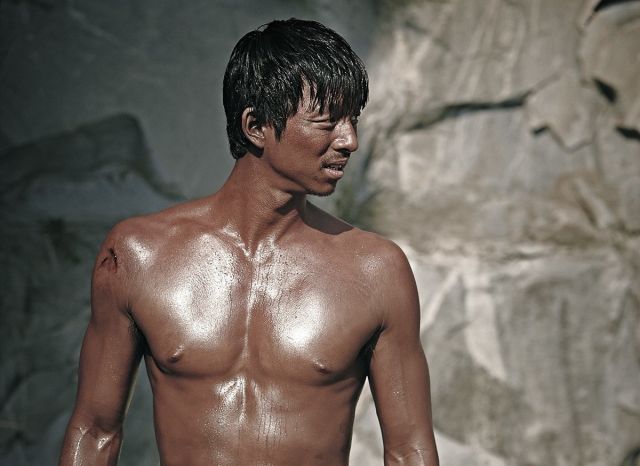 Director Won Shin-yun appeared to have two important creative priorities for "The Suspect". First, make almost every shot a close-up shot. Even the action scenes. No, especially the action scenes. Being able to get a full clear picture of what's going on just isn't as much fun as having close-up shots all the time. Second, make sure that the camera's always shaking. Because, you see, this is an action movie. Everything's always shaking.

It's difficult to evaluate the merits of this movie mostly because of the splitting headache it gave me. Gimmicks like this can work in short doses, but "The Suspect" is well over two hours long and there's never a reprieve from any of this. Even at police headquarters, there's still that shaky camera thing going on because everybody insists on walking and talking, although come to think of it they never seem to actually be going anywhere.

Oh right, the plot. Dong-cheol (played by Gong Yoo) is a North Korean field agent trying to get revenge for what happened to his wife and daughter. This is not clearly explained right away, but rather through extended flashbacks scattered throughout the film that jump around from typical assignments to family life to the fateful job that ruined everything to his pre-movie investigations and then every so often we get suddenly thrust back into the present, where Dong-cheol's involved in his latest escape attempt that involves more shaky cam, close-up shots, escape attempts, punching, vehicular action too every so often. Hopefully by now it's clear where my headache came from.

While the style of "The Suspect" is incredibly disorienting I do have to give it credit for having a storyline that's pretty easy to understand. This is less a compliment to the scriptwriting as it is an acknowledgment that the movie engages in a large number of action cliches. Sometimes absurd and unrealistic to be sure but this is an action movie. When the main character is a guy who can get his neck out from the embrace of a noose through sheer willpower I'm not going to begrudge the script for failing to explain where he keeps finding more guns.

The trouble with this movie is that this is about all the praise I can offer it- veiled compliments about why it's not really terrible. And even this is more out of a need for objectivity than because I actually liked the film. "The Suspect" piles on the style too thick and too hard and the end result is a product that's just plain exhausting. Even in those moments where I could appreciate the film, get that visceral thrill of brutal determination that marks Gong Yoo's performance, it's only a few more minutes before I'm back in headache territory and waiting for the movie to end.

Now, some of you readers out there may find the idea of a headache-inducing movie to be a weird one. Bring on the explosions, you may say, a good action movie is one that doesn't waste time on the boring stuff and is just looking for more excuses to crank up the action. For that reader, "The Suspect" is a passable, possibly even fun piece of entertainment. For anyone else, particularly anyone looking for something more substantial and interesting than Won Shin-yun's disorienting idiosyncratic camerawork, this is not a film worth seeking out.