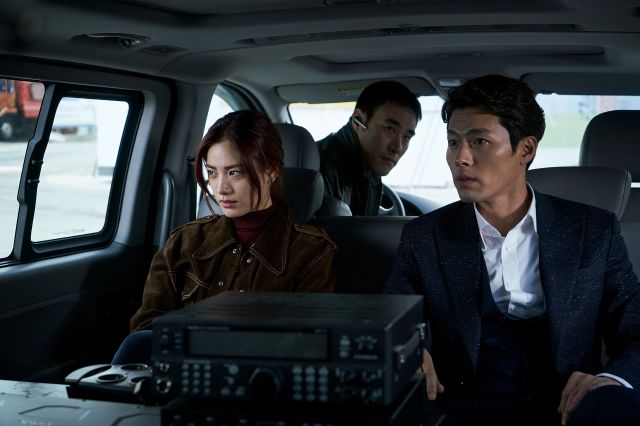 In an odd twist for the wacky charming con artist genre of films, the opening scene of "The Swindlers" features a disturbingly large assortment of people thrown into suicidal despair as a result of a massive fraud. Ji-seong (played by Hyun Bin) is obliquely related to the scam, but most of the movie is not from his perspective. That role falls to Prosecutor Hee-soo (played by Yoo Ji-tae) who operates his own gang of con artists, and also has a connection to the huge embezzlement case.

I can't really explain who any of the characters in "The Swindlers" actually are without ruining the story, because almost all of the dramatic tension is due to the fact that we don't actually know much about them. In this way "The Swindlers" is the platonic ideal of the backstabbing confidence man genre of film. When writer/director Jang Chang-won obfuscates information, it is for the explicit purpose of screwing around with perception to maximize surprise.

So to enjoy "The Swindlers", you can't really look at the film as a normal star vehicle. Since we don't know Ji-seong's motivation, he's not a terribly relatable protagonist. Likewise, since Hee-soo is the straight man for everything and possibly the actual villain, we can't get too deep into his head either without ruining the surprises. "The Swindlers" is more akin to a mystery novel, where you don't really care about who got murdered or why, you just want to know how it happened.

On that note, I rather liked the final round of twists that explained all the prior inconsistencies created by previous plot twists. They very much have that oh duh, how obvious factor, since it involves characters utilizing skills that we had not seen them using for most of the runtime though we knew they had them. Bear in mind that not all of the explanations are all that satisfying, since some of them rely on one character in particular acting in a very predictable way to rather unpredictable situations.

Aside from that "The Swindlers" doesn't really have a whole lot going for it. Even acknowledging that the genre doesn't really require exciting innovative character acting, that's still something I kind of want from a project being headlined by Hyun Bin. That we spend a lot more time with Hee-soo than Ji-seong is especially unfortunate, because this is not Yoo Ji-tae's best work, and I'm not sure anyone told him he was going to have the lion's share of the dialog in the final edit.

"The Swindlers" focuses so much attention on the plot twists the movie kind of pulls off its own sort of meta-heist. The story is not terribly interesting or even creative but I was so focused on following the exact trajectory of the mystery I didn't particularly notice or care about how humdrum the rest of the production was. But is it really entertainment if by the end I realize I have been hoodwinked into thinking the movie was better than it actually was? Well, maybe, but only because I didn't have to pay money for it.