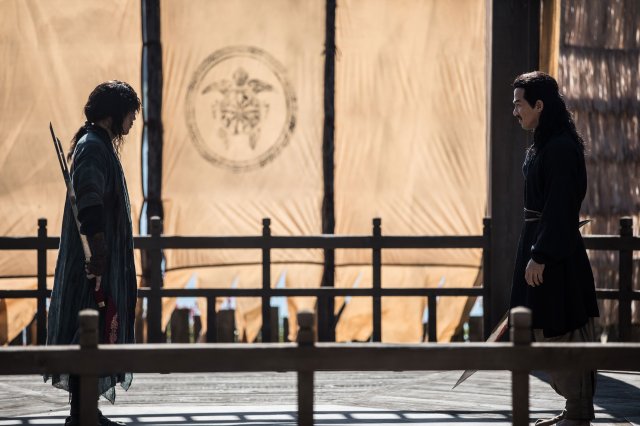 In the prologue to "The Swordsman" we first see the expert swordsman Tae-yool (played by Jang Hyuk) waging a doomed battle against royal usurpers led by Seung-ho (played by Jung Man-sik). Though this scene implies that Seung-ho is a better swordfighter than Tae-yool, for most of the movie, Seung-ho doesn't really do anything. Even more intriguingly, when Seung-ho meets the actual villain, Gurutai (played by Joe Taslim), the smug Qing warlord derisively describes Seung-ho's fighting style as ornamental in spite of his obvious skill. But why?

The answer is philosophical, as writer/director Choi Jae-hoon has crafted a surprisingly ruminative and moody action flick about power and politics. While "The Swordsman" does not get into the reasons behind the coup of King Gwanghae (played by Jang Hyun-sung), we can see that the new Joseon of fifteen years later is not an especially pleasant place. Debt slavery is common and enforced by Gurutai who bullies nearly everyone into submission. Seung-ho could take a stand against Gurutai's tyranny, but chooses not to.

So for that matter does Tae-yool. Although in his case, he's trying to protect his daughter Tae-ok (played by Kim Hyun-soo). "The Swordsman" dispenses with the usual clichés about our tragic hero giving up violence because it's soul-breaking. We see that Tae-yool's initial submissive posture is pragmatic. Tae-yool changes his mind about the necessity of killing surprisingly abruptly, in a scene where he's ambushed by a fake monk, suddenly fighting with his blade rather than his scabbard.

The fake monk is not a particularly strong opponent. But his existence at all signals to Tae-yool that his enemies have no scruples and that it's time to fight dirty. There no romance or glory in the vicious action scenes that ensue, where Jang Hyuk swirls about as an unstoppable force of nature. This is the true power that Gurutai is searching out, not the ornamental combat Seung-ho indulges in. Tae-yool is frightening, yet beautifully choregraphed, inspiring awesome terror in those who only belatedly realize he's not messing around anymore.

This contrasts magnificently with the relative optimism of Tae-ok, who evokes the Tale of Shim Chong. Like the father in that story, Tae-yool is slowly going blind, and Tae-ok wants to help him. But Tae-yool does not believe in fairy tales and for good reason. They're not real. Tae-yool consequently does battle with naive idealism as much as he does with Gurutai's goons. Even Gurutai himself fights by his own twisted code of honor and is shocked when Tae-yool inevitably breaks these imaginary rules.

Yet even in his most bitterly cynical moments, Tae-yool allows his own glimmers of optimism. Take his reference to Tae-ok as the country he is now defending. There's a literal explanation behind that, although the metaphorical one is perfectly solid. Tae-ok, and the next generation in general, are the future of Korea. While Seung-ho fights for inertia and Gurutai fights for the sake of fighting, Tae-yool fights for a future. In the end, that's all anyone should be fighting for.