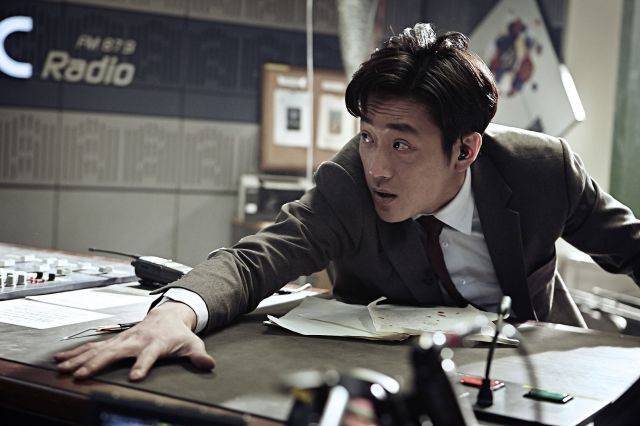 Throughout this film an effective, gradually mounting sense of escalation endures. For the sake of movie spectacle, this is most obvious in the terrorism. The Mapo bridge blows up. People die. And the tension only gets worse and more frantic as time goes on. "The Terror Live" expertly manages to keep scary situations getting even scarier, as even when the degree of danger hasn't changed, the personal visceral level is ratcheting up.

But "The Terror Live" also succeeds in escalating something even more important- cynicism. Former TV anchorman Yoon Yeong-hwa (played by Ha Jeong-woo) has a strange immediate reaction to the terror attack. He sees it as an opportunity to bolster his own position within the news station, and deliberately manages his own exclusive information to maximize the benefit to himself personally. This immediately comes off as callow and selfish. And yet as the ninety minutes of terror move on, this choice takes on new dimensions as we slowly get bits and pieces of how every other person of importance is managing their own information about the situation.

We like to think of people behaving heroically in adverse circumstances, and movies do a lot to confirm this basically faithful optimistic belief. "The Terror Live" takes the bold step of introducing us to an antagonist who is indistinguishable in terms of actions from a typical movie villain. And yet this person's sole condition to end the reign of terror and turn himself in for trial is so trivially easy to accomplish, and would require so little effort on the part of a single person, that all of the pageantry the authorities go through to attain the "correct" form of victory becomes a laughable farce.

I mean that in the meta-textual way. There's certainly nothing funny about the actual proceedings in this film, not even a spot of dark comedy. We're constantly being reminded that innocent people are likely to die at any moment, and that the risk of their coming to harm increases dramatically the longer the process is stalled. I was struck by the clock near Yeong-Hwa's desk, always reminding us how much time has passed and when the next deadline will arrive. It's a tense, frightening statement on just how serious the situation is.

Actions go by too fast for the Yeong-hwa (or the audience) to give much mental calculus to it. As the physical and cynical escalations reach their high point, the way people react becomes increasingly impossible yet predictable to guess. In the film's final gesture, Yeong-hwa makes a choice that, were I to describe it here, would sound horrifically shocking and depraved. And yet in the context of the film, it makes perfect sense. And I have to wonder if I'd do the same.

"The Terror Live" delivers all the thrills and tense plotting one could expect from a movie about domestic terrorism. And as good as these effects are, it's really the greater themes of cynicism and mistrust that really take this film over the top into something truly remarkable. There's no need for conspiracy theories when the most obvious explanation for why the strong brutalize the weak is shoved right in front of us.