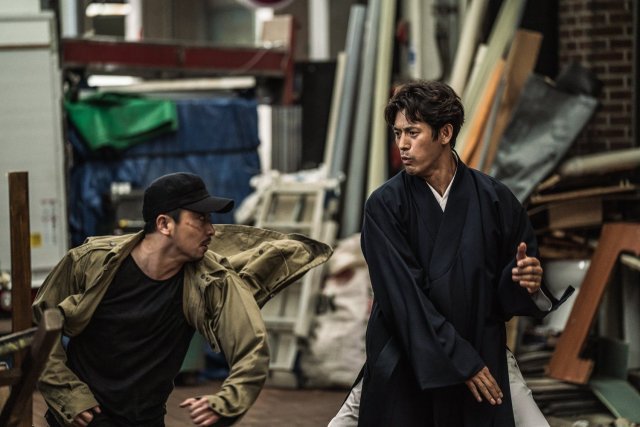 Seong-joon (played by Oh Ji-ho) and Jin-soo (played by Jung Eui-wook) are friends and rivals at a small, bamboo-laden martial arts temple in the deep mountains. They then come down from the mountains and turn out to be...dubiously employable. Or at least, that's the impression I got when the seven years later subtitled flashes by and far from the mystical oriental paradise of the previous scene, Seong-joon now works at a failing massage therapy shop of dubious legality. It's failing in part because he's too nice to charge money to his poor, elderly patients.

Seong-joon's wife and business manager So-mi (played by Shin So-yul) is in a constant state of nagging irritation about this state of affairs. I liked how Seong-joon's phone describes her as a beautiful demon. There is surprising charm in the sheer powerful force of her nagging, which contrasts with and plays well off the sheer dopiness of poor bespectacled Seong-joon, who we are led to believe is a bit of an idiot when it comes to anything except martial arts and its practical application in massage therapy.

There is, for better and worse, a strong situation comedy vibe to "The Therapist: Fist of Tae-baek" that really nails how the unassuming hero of a kung fu movie would have trouble making ends meet in a normal life. Oh Ji-ho is two for three this year on being well-cast, with his stupidly blank and unassuming looks allowing him to function as a perfect straight man to So-mi's more grandiloquent gestures. The acting even works in parallel to his fighting style, which is to get to the point as fast as possible.

Where the situation comedy aspects are at their worst is that new conflicts keep getting brought up and solved in a twenty-minute timeframe with no apparent long-term consequences. Man-woong (played by Dong Zhang) gets his own separate extended subplot where he's the obvious final boss for Seong-joon to defeat, although his storyline has a markedly different tone compared to the rest of the movie. It's also solved almost entirely off-screen by a character with very little screentime relative to importance.

That's probably the single-oddest aspect of "The Therapist: Fist of Tae-baek" is that there's a lot of characters we don't really need even though the cast isn't all that big just because the story's so transparent. They're useful mainly for brief one-off jokes or slapstick sequences. Which again, is the entire point of a situation comedy, it just comes off as a bit peculiar in the context of a feature-length narrative.

But I'm inclined to look at these odd pacing decisions in a favorable light because "The Therapist: Fist of Tae-baek" is so very good at its two actual stated goals- being funny, and having cool fight scenes. Even the highly stereotypical kung fu music is outstanding in this context, perfectly matching the cheesy crowd-pleasing vibe that is so obviously what director Choi Sang-hoon-II is going for. More than anything else "The Therapist: Fist of Tae-baek" is a whole lot of fun, and highly recommendable.