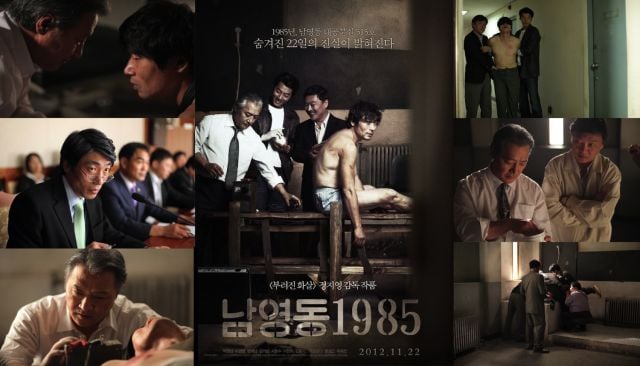 In "Unbowed", director Chung Ji-young dramatized the 2007 "Crossbow Terror Incident" and in "National Security" (literal translation: "Namyeong-dong 1985"), he once again returns to the fuzzy realm of creative nonfiction as filmic fodder. The film takes a long and gruelling look into the torture and trails of Kim Jong-tae (Park Won-sang), an ex-advisor to the Democratic United Party who is condemned to 22 days of pain, humiliation, and psychological suffering. The film takes place in 1985, a time when Korea was under the military dictatorship of Chun Doo-hwan. Kim, as an activist against the current government, is held at a special interrogation facility in Namyeong-dong and forced to 'confess' that he is a communist from North Korea and was involved, if not led, an anti-government movement. This much of the story is quickly revealed, and Chung wastes no time in getting to the meat of his second film, the torture.

A disturbingly large percentage of "National Security" is comprised of the innocent Kim being tortured and beaten by the most egotistical and sorry group of intelligence officers you are ever likely to see. There is a hierarchy to all the goons who come in and out of Kim's sorrowful existence, but it is the 'undertaker' (Lee Kyung-young as Lee Doo-han) who dishes out the harshest treatment. In addition to the regular beatings, Lee steps in with his little briefcase of 'tools' and inflicts a combination of cruel water and electrical torture. He's cold, calculating, and remorseless in his actions, but also not opposed to emotional outbreaks and cold water himself.

However, as foreboding as the 'undertakers' presence is, the fear-factor is heavy dowsed by the buffoonery Korean cinema so often defaults to. There are no hooded-villains dragging Kim around and remaining mysterious and threatening. Kim is not forced to sit in a cell for hours or days in isolation, nor are his captives menacing themselves. Instead, the gang of misfits set to monitor him are lackadaisical, goofy, and often have big chats about their personal life, career ambitions, and even take naps while in the same room as him. Hardly the mark of antagonists that are meant to be taken serious. And if this wasn't enough to blunt Chung's efforts, the jokes and 'comedic relief' (because that's what you need in a torture film) will really disorientate. I found it extremely difficult to watch a man being tortured again and again (and again), only to have the crackpots conducting it all makes jokes, applaud the undertaker's work, and waddling around like schoolboys fighting with each other. It knocked all the serious out of the film and, quite frankly, dishonoured the film as it was, after all: "Dedicated to all the torture victims around the world".

I really cannot downplay this aspect enough. So much of the film's screen time is dedicated to Kim's excessive torturing, and to have it continually coupled with the same clowning and unprofessionalism so many Korean films place on 'authority' figures is bizarre to say the least. Any sympathetic light cast on Kim (outside of him screaming and foaming at the month of course) is skimmed over and assumed to carry weight rather than actually assigning it. Kim's family, for example, is supposed to represent his will to fight, something to live for. However, very little time is given to show that any meaningful bonds were there to begin with. The last scene we see of his wife, for example, he gives her nothing more than a light squeeze on the arm. It's really not the kind of love we'd all like to see people fight for. In fact, Kim is seen to have very little to hold him together other than is commitment to some aloof sense of nationalism and egotism. Again, motivations behind a lot of the characters and their actions are muddled, resulting in Chung's film being a long and torturous journey itself.

"National Security" made its world premieres at the 17th Busan International Film Festival last year, and its Italian premiere at 15th Udine Far East Film. Despite such a platform the film did not perform well at the Korean box office. Chung Ji-young's return to the cinematic portrayal of real-world events is lacklustre and flaccid. The film's message/themes (as illusive as they are) are all wrapped up with big bright bow in the last fifteen minutes, leaving little room for progression or development. This is Chung's moral Deus ex machine at work, as a suddenly flurry of narrative events attempts to pick up the breadcrumbs the film should've been dropping all along. Perhaps Chung was having too much fun shooting the naked and screaming Park for such annoying considerations as meaningful progression.