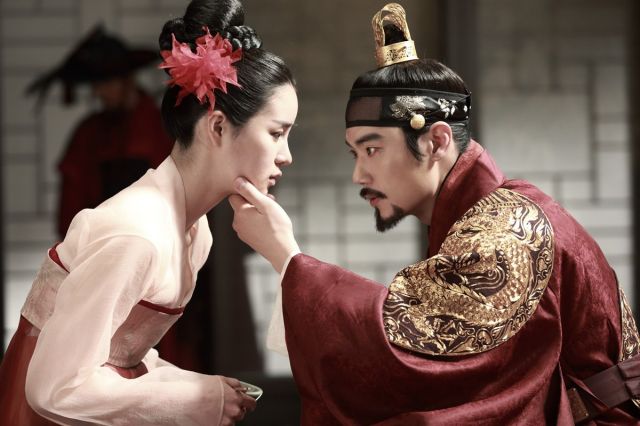 The time is the early sixteenth century, and Korea is under the reign of King Yeongsan (played by Kim Kang-woo). His retainers are in a bit of an awkward position, what with King Yeongsan being a depraved maniac. The man's got delusions of being attacked by ninja assassins, personal grudges against horses, an obsession with uncomfortable nude model painting, and the occassional tendency toward violent graphic murder.

The retainers aren't much more sympathetic. The problem with a villain like King Yeongsan is that any character who goes along with what he wants for any period of time, for any reason, comes off like a pretty big jerk. There's swords everywhere guys just use one! We keep getting backstory on why people have a grudge against King Yeongsan, but the better question is pretty consistently why anyone would not want to kill King Yeonsan, if given the opportunity.

Unfortunately King Yeonsan isn't much of a villain, mostly because he's too crazy to be taken seriously. He's mainly a plot device designed to allow "The Treacherous" to deliver as much shock value as possible, extremely quickly. We're barely done with one scene of horrid depravity before someone has to come up with another way to entertain King Yeonsan. Even when he's not around there's always a disturbing training montage around the corner, begging questions like, is it technically misogyny for a film to glorify the molding of women into sex workers when the backdrop is intentionally grim?

Director Min Gyoo-dong seems to be trying to have it both ways. He wants us to know that sexual depravity is wrong, and yet the camera seems to enjoy the constant emphasis on women's breasts just a little more than is probably healthy. I wonder what the casting call was like for this movie. Granted Min Gyoo-dong probably didn't have armed goons forcibly tear women away from their families but I kind of doubt anyone wants to show off their role in "The Treacherous" to the folks back home.

The plot..? Well again it's kind of hard to keep track of the importance and motivation of our so-called heroes when "The Treacherous" is less about story and more about deranged montages. Tonally speaking the movie is pretty even, and while the runtime is a tad long, this is spectacle for spectacle's sake so that's not necessarily a bad thing. I'm not really sure who the target audience is supposed to be for this kind of costume drama, but whoever you are don't worry- all your pressing questions about Joseon underwear will be answered in complete detail here.