[HanCinema's Film Review] "The Truth Beneath" 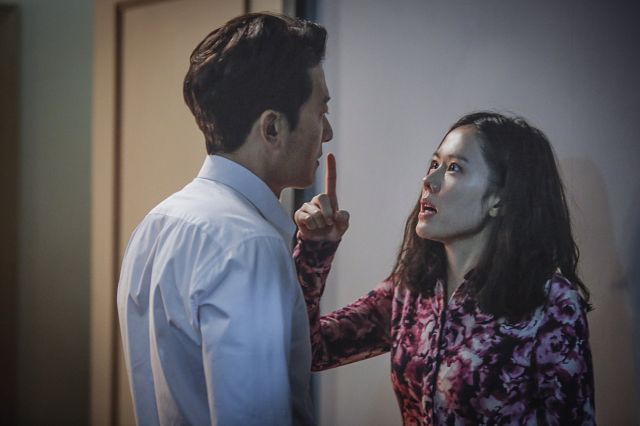 Jong-chan (played by Kim Joo-hyuk) and his wife Yeon-hong (played by Son Ye-jin) are a husband-and-wife political couple in the midst of a tough campaign. For all this, their home life is mostly pleasant. Then a crisis erupts. Initially the fault lines are drawn on whether the big event qualifies as a crisis at all. Where Jong-chan wants to focus on the campaign and leave the detective work to more trusted hands, Yeon-hong becomes obsessed with discovering..."The Truth Beneath".

On the superficial level "The Truth Beneath" has the rumblings of political conspiracy. But Yeon-hong's one woman investigation constantly manages to run into the same problem over and over again. Rather than finding an indictment of any obvious villain, Yeon-hong simply discovers that she has maintained a rather appalling ignorance over what's happening with anyone else in her own family.

This is what really starts to gnaw at Yeon-hong internally as the film continues. She has to interrogate people to learn facts which by any rational measure Yeon-hong should already know. Yeon-hong's problem is simply wishful thinking. When her family's personal situation seemed to improve by magic a few months before the election, she stopped asking questions. Where Jong-chan continues to stubbornly believe that a family policy of not asking questions is a sustainable long-term strategy, Yeon-hong realizes that this attitude has almost certainly completely destroyed her life.

By conflating the Yeon-hong's dedication to her husband's career with her own personal failures, "The Truth Beneath" makes a political statement. That is, it makes a statement about how people use politics as a form of rationalization. The actual politics are irrelevant. Jong-chan and Yeon-hong are implied to be liberals politically, which is an odd choice considering how most Korean films lately have made a point of giving conservative politicians negative character traits.

That's because director Lee Kyoung-mi's indictment of Jong-chan and Yeon-hong is in fact an indictment of us. That is, those of us who think that the mere virtue of having "correct" political opinions automatically gives us moral superiority. While it becomes clear with the final few twists and turns that Jong-chan's moral failures were no doubt worse than Yeon-hong's, this does not render Yeon-hong a competent capable person. In neglecting her relationships, Yeon-hong sowed the seeds of her own doom.

I may be going a little too far with this analysis. Really "The Truth Beneath" is a fairly standard investigative thriller where the emotional catharsis comes from perspective analysis. As Yeon-hong uncovers more of the truth, I looked at Son Ye-jin's face and saw a woman increasingly realizing to her horror that she could have prevented this, and the tearful reunion at the end is only a sad reminder of what could have been.

Oh, and I should also mention, Joan Faye is not a real singer and Wild Rose Hill is not a real song. Which is a bit of a shame, given how perfectly it encapsulates the film's overall tone of moody despair occasionally punctuated by hope.

"The Truth Beneath" is directed by Lee Kyoung-mi and features Son Ye-jin and Kim Joo-hyuk.

"[HanCinema's Film Review] "The Truth Beneath""
by HanCinema is licensed under a Creative Commons Attribution-Share Alike 3.0 Unported License.