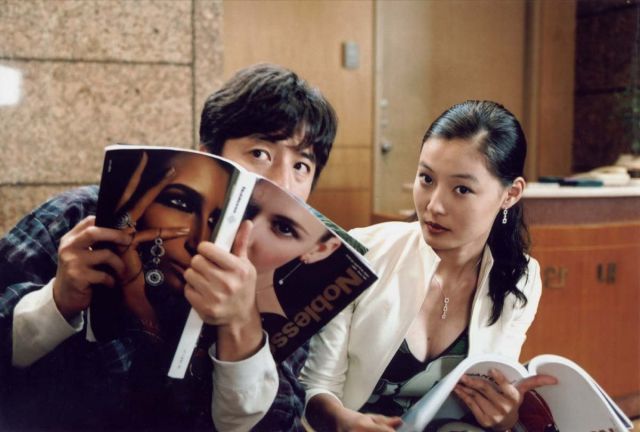 Myeong-soo (played by Jung Joon-ho) is a street rough who gets into fights. The energy is not a complete waste, though, because Myeong-soo's identical twin Hyeon-soo (also played by Jung Joon-ho) has managed to take advantage of Myeong-soo's low maintenance costs to get a good education and eventually a prestigious legal career. The main consequence of this being that, every so often, Myeong-soo has to pretend to be Hyeon-soo for the greater good. Really, just to help Hyeon-soo's career.

What I just described is not so much a plot as it is a single joke, which writer/director Park Heung-shik insists on repeating in gradually more elaborate ways. The most common variation is that, more genteel lifestyle notwithstanding, Hyeon-soo is a bit of a pig when it comes to women. For his more questionable lifestyle choices, Myeong-soo shares a somewhat tender relationship with Soon-hee (played by Kim Hye-na), a kind woman who wants a better life but can't think of why she should deserve it.

Soon-hee is not to be confused with Soon-hee (played by Yoon So-yi), another woman who Myeong-soo and Hyeon-soo meet who eventually becomes the centerpoint of a bizarre genre-shifting conspiracy that I'd rather not spoil because it only becomes relevant about halfway through "The Twins", after an irritated Myeong-soo has finally recovered from having just been forced to be an extended body double for his twin a second time.

So far this review has just been an embarassing excess of plot summary, and I sincerely apologize for that. I'd like to be able to discuss "The Twins" in some sort of relevant thematic depth it's just...there's not any. "The Twins" dedicates most of its running time to setting up story markers for payoffs that never really happen. Nearly every one of these story elements is just a set-up to a joke that's not all that funny, yet horribly difficult to explain. That much is telegraphed right from the (Korean) title, and its massively complicated pun.

I hesitate to attack "The Twins" that much for being unfunny because comedies in general are always hit-and-miss depending on whether or not the viewer is amused by whatever the joke, and that's especially true when it comes to comedies from another country. Even so, I have laughed at Korean media before, and I can't recall having laughed at any point during "The Twins". That much is a pretty black mark.

There's also the problem of the little plot we do get not adding up to anything. Note how all it takes to reform Hyeon-soo is a single conversation, his character having spent most of the movie being a self-centered jerk. There is a sort of alleged romantic subplot involving Myeong-soo and both Soon-hees, one of which fizzles out after a promising beginning, and the other of which consumnates for no particularly good reason, given how most of the characters in "The Twins" act vaguely antagonistic to each other most of the time. Save for the novelty of watching Jung Joon-ho pull off dual roles, there's not much of interest in "The Twins".

"The Twins" is directed by Park Heung-shik and features Jung Joon-ho, Yoon So-yi and Kim Hye-na.