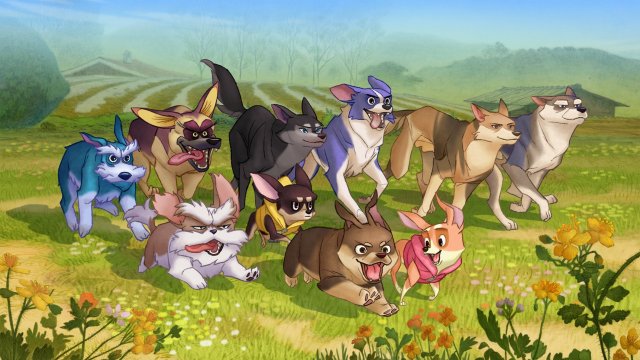 In the fairly arresting opening scene to "The Underdog" we see Bundle (voiced by Do Kyung-soo) abandoned by his owner on a random hill. The socially conscious nature of this moment is unmistakable. In contrast to the wishful thinking of the owner that a domesticated dog can be happy and free out alone, we quickly see how in reality abandoning Bundle or any other dog in such a way is an act of cruelty.

Yet what starts out as an indictment toward the cavalier attitude humans have toward their own pets is muddled as Bundle makes companions and acquires new goals. What starts out as a story of survival turns into an odyssey, at the clear expense of a well defined moral message. Urban scavenging and rural living off the land are ultimately shown not to be survival mechanisms for unwelcome dogs forced to persist in a world owned by humans, but lifestyle choices to be accepted without judgment.

The idea that stray dogs have agency is the very reasoning that led Bundle to be abandoned in the first place. You could easily interpret "The Underdog" as just being the fantasy of Bundle's owner having to rationalize to his partner why it was OK for them to abandon her beloved pet. And really, "The Underdog" plays so fast and loose with canine intelligence, not to mention the laws of physics, that it's already halfway to being a fantasy film anyway. Elements like the cruelty of dog breeders or dog catchers contradict this romantic reading, albeit not very successfully.

Because "The Underdog" acts like human cruelty is individual rather than systemic, the moral lessons aren't terribly useful. The movie kind of suggests that maybe people shouldn't get pets from breeders or pick dogs to raise based on their cuteness. But with the human characters being presented with such variable levels of sympathy, there's all too much wiggle room. Bundle himself is surprisingly wishy-washy on the human question, to the point I wasn't really very sure why he was so determined by the end of the movie to rough it in the wild.

"The Underdog" also pulls punches when it comes to the severe brutality of the great outdoors. Early on we're led to believe that killing other living creatures for food is psychologically difficult for an animal that was raised domestically. Yet this mental barrier is broached so easily later in the film that the scene plays rather surprisingly as comic relief. The contrast with "Leafie, A Hen Into The Wild" and its far more serious treatment of animal mortality is unavoidable, as that classic movie came from the same animators and is drawn in the same style.

I can offer unqualified praise for the vibrant, unique animation in "The Underdog" and the story is fairly engaging. There are plenty of effective harsh moments that really sell just how serious and dangerous the situation is. And then there's the goofy crowd-pleasing setpieces, which completely undermine that brutality. "The Underdog" vacillates between anthropomorphization and realism, ultimately failing to do either concept proper justice.

3 Blu-rays to be won

To enter, simply leave a message below.