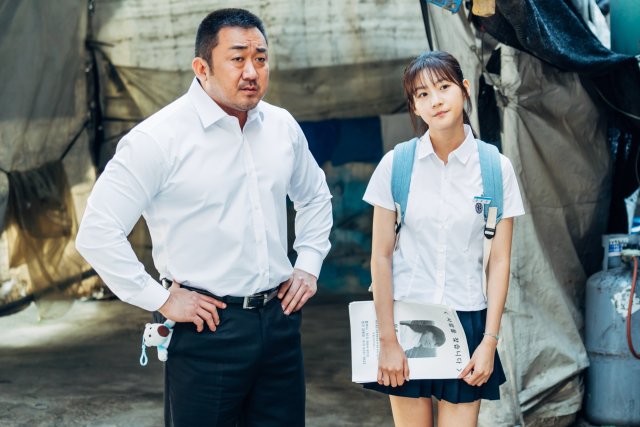 In the opening scene of "The Villagers" we see Gi-cheol (played by Ma Dong-seok) forced into a change of careers for breaking the rules. In one of the movie's more interesting dramatic flourishes, Gi-cheol is not played from that point forward as a renegade. To the contrary, Gi-cheol is surprisingly passive. He does get provoked into investigating a missing persons case because high school student Yoo-jin (played by Kim Sae-ron) has been aggressively putting out flyers. But even then, Gi-cheol is subdued.

"The Villagers" is not a particularly subtle movie when it comes to narrative themes. This is a movie about learned disinterest. The people in Gi-cheol's new rural home don't especially care about the fact that a high school girl has apparently just vanished into the ether. Indeed, they're far more likely to get mad at Gi-cheol for annoying them with anything that might force them to do more work.

Yoo-jin somewhat counterintuitively takes the exact opposite approach. She is diffident and mistrusting toward Gi-cheol because she misinterprets his cautious interest in the case of her missing friend as being either a subversive attempt to dissuade her or possibly some sort of sinister plot on the part of a suspicious adult stranger. Yoo-jin's means of forcing people to pay attention to the case is by acting out and being aggressive. Yoo-jin has long since learned that nice girls don't get what they want because adults will gladly walk over them.

These are all decent thematic ideas. The problem with "The Villagers" is that the movie is so transparent with its intent that there's really not much in the way of surprises. At its very most intense moments "The Villagers" is just a basic crime procedural where twists can usually be guessed just by thinking back to which characters have received exposition but who haven't been received much in the way of narrative relevance yet.

For a Ma Dong-seok movie that explicitly deals with violent crime there's surprisingly little in the way of major fight scenes. That's a big part of the point, though- the nature of the crime is such that it really doesn't take much in the way of effort to unravel the plot and expose the criminal. It's just that no one actually wants to solve the crime because in addition to crime investigation requiring serious work the risk of accidentally offending some random person in the upper hierarchy is far more likely than being rewarded for showing initiative when it comes to expressing an interest in neighbors.

The most effective scenes are just the ones where Ma Dong-seok is meekly and submissively responding to the dictates of an authority figure knowing well he can't just punch his way out of social awkwardness. But these elements exist rather awkwardly alongside the criminal invesigation and action thriller aspects of the plot. Ultimately "The Villagers" just manages to be watchable and vaguely interesting, the whole product adding up to be less than the sum of its parts.