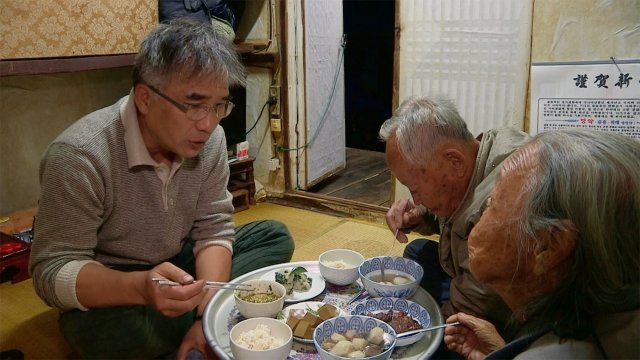 Prior to watching "The Wandering Chef" I had not heard of famed chef Lim Ji-ho. Nor did I really learn that much about him through the documentary itself. With painstaking humility, director Park Hye-ryoung only provides brief clips early on to contextualize Lim Ji-ho's international culinary reputation. Even as a biographical film "The Wandering Chef" is spare on the details, withholding much critical information about Lim Ji-ho's family background until near the very end.

Instead nearly the entirity of "The Wandering Chef" is dedicated to Lim Ji-ho's procurement process for ingredients. We see him wandering various mountainsides of the Korean peninsula searching out material which he uses for his quaint little masterpieces of fine cuisine. Emphasis on the word quaint- Lim Ji-ho makes and shares humble meals with the various persons in the areas where he's searching out ingredients. There's a filial atmosphere about these social interactions, a sort of cognizance of loneliness both for Lim Ji-ho himself as well as the elderly persons he dines with.

The documentary deliberately centers itself around Lim Ji-ho's own distinctive family background, and the various mothers in his life. Yet with every new residence Lim Ji-ho visits, I couldn't help but be struck by how none of these people really have families in the traditional sense. There's a clear generational shift, between older Koreans content to just live out in the mountains and younger Koreans making their living in an alien world.

The bridge between these two environments is Lim Ji-ho's ingredient procurement process, which makes up the actual bulk of the footage. "The Wandering Chef" is reminiscent of "Little Forest" in this regard, except with even less plot than that back to nature movie. As a documentary, "The Wandering Chef" also has a certain reality about it. Lim Ji-ho is about as blasé when it comes to his actions as director Park Hye-ryoung is about documenting them. There's no immediately obvious purpose to what Lim Jim Ho is doing, but the quiet ambience of the mountains are comforting.

This tone-setting adeptly sets up the final portion of the documentary which features some emotional turmoil, but more in the sense of life than the sense of scripted narrative. The foodstuff Lim Ji-ho procures throughout "The Wandering Chef" is by nature transient. The meals are cooked and eaten and then everyone moves on. For Lim Ji-ho, the structure of this process provides immense psychological comfort, allowing him to move past the inevitable grief of the past, present, and future.

The cinematic scope of these emotions is what defines "The Wandering Chef" as a film documentary rather than the more practically minded television documentaries that director Park Hye-ryoung is known for. The storytelling is sweet, yet ultimately aspirational. "The Wandering Chef" promotes a calm state of mind more than it educates in terms of practical information. This makes it a love letter of a documentary, both to food and to the idea of mothers of all stripes.