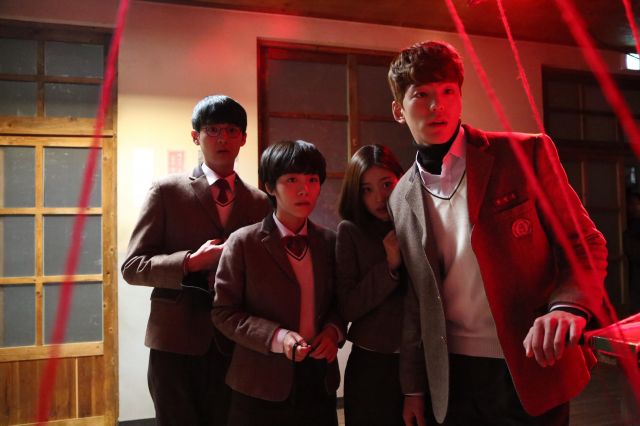 A gaggle of idiot high school friends have been worrying about Eun-ha (played by So Joo-yeon) who has been on the emotional outs following the death of her best friend Ji-eun (played by Lee Yoo-mi). So they do what any good friends would do, and take her out to a creepy abandoned amusement park on the outskirts of Ulsan. This culminates in a trip to an old haunted cavern that rather ominously bolted shut at the worst possible moment in the movie's cold open.

...Hm, you know, put that way, their behavior actually sounds pretty stupid. But that's only because "The Whispering" is obviously a horror movie. Curiously enough, the most effective scares in "The Whispering" are the ones that involve, well, actual whispering. Eun-ha keeps drifting off to sleep and keeps hearing Ji-eun telling her not to go, then a bunch of freaky imagery pops up out of nowhere. Spooky carnivals can be easily avoided. Dreams? Not so much.

So why then, does most of "The Whispering" take place at the carnival, with the whispering aspect disappearing almost entirely just as soon the main characters get there? Probably because that's what was in the script. No, I mean really, if you're writing a horror movie, you've got to toss in a wide variety of scary moments in there somehow, and an abandoned carnival is a pretty easy way to get lots of variety in there. Mannequins, ghosts, coffins, hobby horses, whatever fiendish creatures happen to be wandering around. Props to the makeup department by the way. There's quite a bit of variety to the monsters here.

The script? Not so much. It gets to be pretty predictable after a certain point, and the actors all have pretty standard stock reactions to whatever scary thing is happening any given moment. Personally, I thought token nerd Dong-il (played by Kim Tae-min) had the best of the bunch. His situation starts out just being normal dangerous, then all the ghost hands pop out of nowhere and all of a sudden the guy's like, really annoyed. Not scared, just annoyed, which oddly enough seems like a fairly intuitive reaction.

That's about the most interesting thing that happens. Well, there's also a brief subplot about how some of the idiot teenagers start trying to stage scary scenes for a livestream. Now, I'm not saying that only one movie is allowed to use that particular gimmick, but "Gonjiam: Haunted Asylum" went so much further with that concept earlier this year that "The Whispering" just comes off as lazy in comparison.

Ironically enough it was probably thanks to the success of "Gonjiam: Haunted Asylum" that "The Whispering" briefly had decent distribution from CGV. There's a market for basic genre horror after all- mostly dumb teenagers like the ones in the movie who haven't already watched enough horror movies to know what's going to happen next. For everyone else, "The Whispering" is far from unwatchable, and even manages to knock off a legitimate scare every once in awhile just out of reflex. That's better than nothing, I guess.