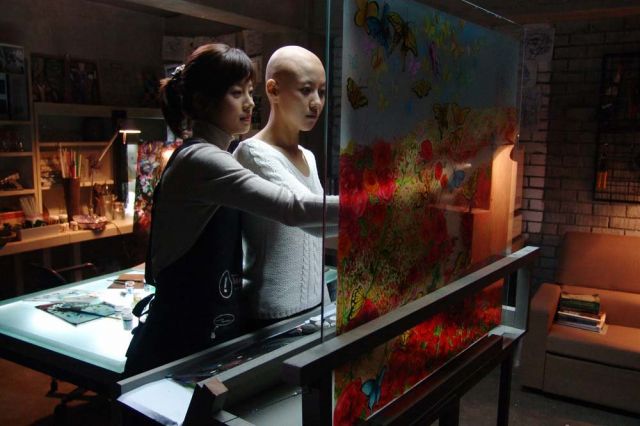 Soo-hyeon (played by Chae Min-seo) is dying of leukemia and struggles to find the motivation to do much of anything anymore. So her sister Ji-hyeon (played by Yoo Sun) comes up with the bright idea of buying Soo-hyeon a wig as a means to boost self-esteem. It actually ends up working save for one inevitable problem. "The Wig" is in fact a monstrous ghost that exists in this world only to settle a debt owed for a past life of misery.

In all fairness the final denouement fully explaining "The Wig"'s true motive actually ends up being surprisingly creatively out there. It could have used a little more polish. Had Ji-hyeon's boyfriend Gi-seok (played by Bang Joong-hyun) held a more active role in the wig-related portion of the story, "The Wig" would have come together a lot more nicely. But alas, the final twist is more inventive than it is truly memorable.

It doesn't help that so much of "The Wig" is, like the title character, just a tad disconnected. Consider how the relationship between Ji-hyeon and Gi-seok degrades over time. It would have been nice if we had gotten clearer clues as to how and why that happened. I barely even noticed when Ji-hyeon's life undergoes a horrifying transition because, well, mainly because "The Wig" itself glosses over this section completely, forcing us to worry about Soo-hyeon consistently even when Ji-hyeon is the sister usually in immediate danger.

There's plenty of good ideas here, it's just hard to see them when director Won Shin-yun is more interested in showing off creepy special effects than properly developing the characters or the mystery. These are fairly good effects though, exactly the kind of thing that goes down fairly terrifyingly in a fully dark room. The absolute high point is, of course, the scene where Soo-hyeon is left alone to try and make good use of her head. But throughout "The Wig" we also get constant blatant hints of the malignant ghost unintentionally putting everyone on edge because they know something is wrong. They just can't see it.

"The Wig" gets strange compliments in the form of how it's nowhere near as goofy as the premise makes it sound. No, "The Wig" does not run free and go on the run trying to strangle people without even so much as an attached body. Once again, "The Wig"'s motives are rather precise, and the rift it creates between Soo-hyeon and Ji-hyeon is less intentional as it is a natural consequence of a communication breakdown.

After all, what if your sister seemed to be less sick lately, but also she's stopped caring about your feelings or even paying much attention to what's happening to you? That's the emotional center "The Wig" should have been about. Alas, without proper acting depth, the narrative arc doesn't really go anywhere and it's only through the use of effective imagery that director Won Shin-yun is able to give us a convincing closing shot, reminiscing over what might have been.

Available on DVD and VCD from YESASIA and Amazon