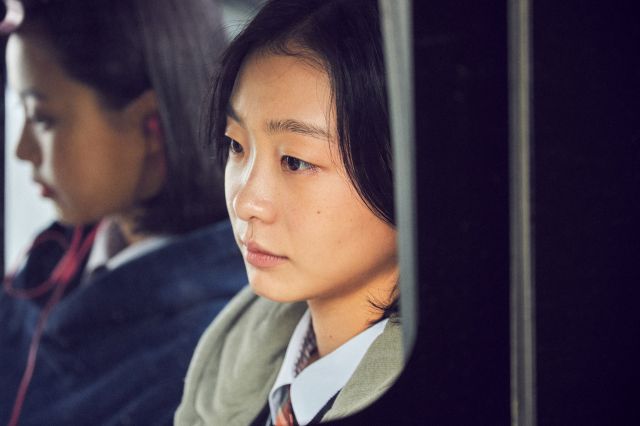 Highly presumptuous English title aside (the Korean one just uses the first two words), "The Witch : Part 1. The Subversion" isn't the blatant sequel bait you're likely expecting. The movie's storytelling tradition is actually surprisingly out of date. We've got Ja-yoon (played by Kim Da-mi), who is obviously a witch, but does not seem to realize that she's a witch. Then we have to spend ninety minutes watching Ja-yoon pretend like she's not a witch before someone finally pops up to explain her backstory.

Oh yeah, that storytelling tradition I mentioned? That was back when movies were usually only ninety minutes long. They were concise and got to the point relatively quickly, which is why I spent most of the middle portion of "The Witch : Part 1. The Subversion" very impatiently waiting for the plot to actually get started. It's not until the halfway point that we get to see some witches murder an architect and up until then all we get are some extremely cryptic conversations.

They're pretty pointless conversations too. I counted at least four different factions fighting each other in the final setpiece, but could only tell you the actual goal of one of them. Somehow, the villains never get around to talking about what they're trying to accomplish and why they're messing around with witches in the first place. Every other part of the backstory is gone over in excruciating detail except for motivation, which is by far the most interesting one.

But let's get back to that final setpiece. Did I mention that Park Hoon-jung directed this? Because "The Witch : Part 1. The Subversion" is the kind of movie that looks so crazy cool that you really are left wondering who came up with that brilliant visual design. Hilariously, "The Witch : Part 1. The Subversion" doesn't even have very much witchcraft. The main thing the witches do with their powers is use them to gunfight more efficiently.

Also, acting like a creepy psychopath appears to be another important inborn trait. The slow fade into smoke, the weirdly slurred English, and just body language in general really sells the witches as being an otherworldly presence whose existence in our world is unwanted and uninvited. The contrast with Ja-yoon's normal friends and family, all country bumpkins, is especially great. This creates the atmosphere of how no one knows what they're getting into with all this witch stuff. Consequently, the tonal shift in the final setpiece is jarring in the best possible way, building up an amazingly tense climax.

While "The Witch : Part 1. The Subversion" has an absolutely pitch-perfect final half-hour, I'm still somewhat miffed about all the pacing issues up until that point. Honestly? Depending on how impressed you are by the big twist, that might not be so much of a dealbreaker. There's the local flavor, there's the sympathy we as an audience have with Ja-yoon as a person, and then there's the promise of mind-bendingly awesome hand-to-hand combat once an actual fight breaks out. "The Witch : Part 1. The Subversion" succeeds admirably at those fundamentals.

"[HanCinema's Film Review] "The Witch : Part 1. The Subversion""
by HanCinema is licensed under a Creative Commons Attribution-Share Alike 3.0 Unported License.