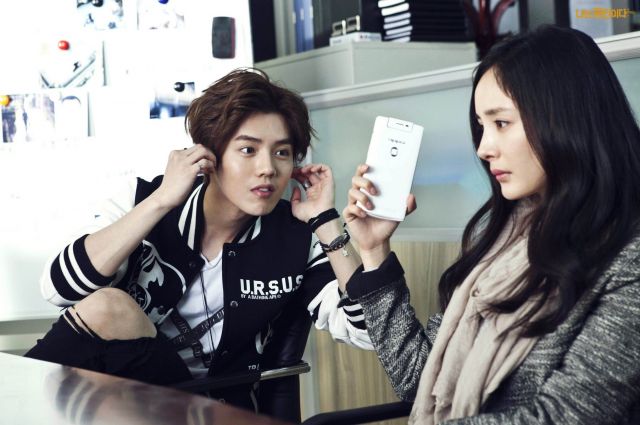 Shaoxing (played by Yang Mi) is studying to be a police officer. A disastrous accident involving family disables Shaoxing to an extent that people constantly underestimate her. But ultimately Shaoxing really just underestimates herself. A chance encounter with evil, however, makes Shaoxing into "The Witness - 2016" with all the information necessary to bring down a notorious criminal. Assuming she can survive that long anyway.

"The Witness - 2016" is the Chinese remake of "Blind", and represents director Ahn Sang-hoon and writer Choi Min-seok taking a second crack at the story. Consequently, "The Witness - 2016" has quite a bit more polish than "Blind". While most definitely still an action thriller at heart, the remake has much stronger crime procedure elements. Consider the central mystery- serial killer Tangzheng (played by Zhu Yawen) has a very specific, creepy motive for selecting victims, which originates, ironically enough, from a very similar emotional place as Shaoxing.

In comparison to the protagonist from "Blind", Shaoxing's emotional state is also much better developed. Her relationship with Linchong (played by Luhan) develops very naturally, as they go from mutual dislike to her worrying about what will happen to him, to him worrying about what will happen to her, and over that sense of reciprocity they manage to genuinely bond right before the final setpiece.

Sadly, the bad story logic in "Blind" remains present in "The Witness - 2016". While Tangzheng's emotional motives for committing serial murder make sense, his determination to go after Shaoxing and Linchong does not. Multiple scenes indicate that Tangzheng does not, in fact, want to kill anyone unless they fall in with his stated motive, and the act of chasing Shaoxing and Linchong creates an evidence trail that would not have existed if he had just left them alone. Additionally, while the parallelism of Tangzheng and Shaoxing having similar origin stories is interesting, it ultimately remains underdeveloped for the sake of action thriller setpieces.

I try not to compare remakes to the original product so much, but "The Witness - 2016" is very interesting in that it's basically just an improved rewrite of "Blind" with most (but not all) of the logical flaws fixed, better performances, a script that has an occassional moment of smart humor, tighter editing, more well-developed characters, and all the interesting stylistic flourishes that were the high point in "Blind" left intact. The improvement is fairly marked, and kind of makes me wish that more directors of mediocre movies got the chance to remake their own work, just as a sort of intellectual exercise.

The main problem is that the core concept of "Blind" and "The Witness - 2016" still doesn't really work as an action thriller. A cerebral thriller, with more emphasis on Tangzheng's motivation and less on his improbable serial killer powers could make "The Witness - 2016" a genuinely excellent movie. Maybe one day Ahn Sang-hoon will get a chance to pitch yet another remake to a different film market and we'll finally have perfection. Alas, realistically speaking, it looks we'll just have to settle for "pretty good".