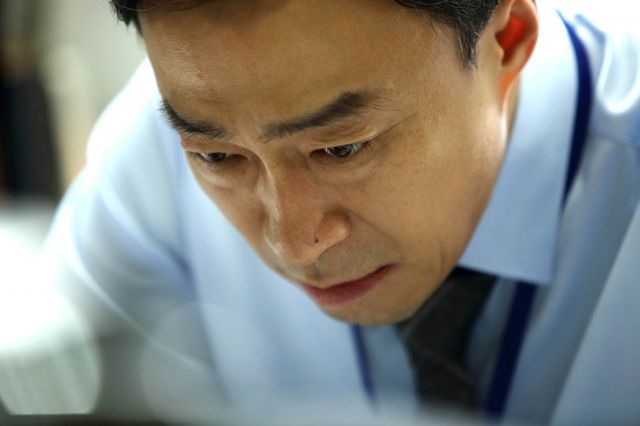 The first thing we see suspicious-looking cap-wearing Tae-ho (played by Kwak Si-yang), we learn that he failed to knock out his would-be murder victim. We then learn that Tae-ho does not know how to tie a proper knot. So right from the beginning, Tae-ho comes off looking rather incompetent. It was with great irritation that I realized that for the rest of the movie Tae-ho would demonstrate superhuman powers including, but not limited to, teleportation, omniscience, immunity to physical damage, and invisibility.

The last one is the most ridiculous of the bunch, considering the main thrust of the story is that older salaryman Sang-hoon (played by Lee Sung-min) incidentally sees Tae-ho from far away in the dark. Thus, Tae-ho concludes that the best way to evade justice is to endlessly harass Sang-hoon into not talking. In context this obsession is even more ridiculous than it sounds, since homely keen-eyed detective Jae-yeop (played by Kim Sang-ho) is able to build a reasonably strong case against Tae-ho based on normal investigative work without Sang-hoon's positive identification.

Sang-hoon being the actual main character here. "The Witness" is about his unwillingness to tell the cops everything he knows, when Sang-hoon doesn't even know much to begin with. Irrational fear of the murderer plays a lot into this, but Sang-hoon is also highly affected by social pressure. Other apartment residents are completely nonplussed by the unfortunate incident, because the victim was not a resident but rather a random interloper. They want the police to go away, lest their property values drop.

That much is actually a really good premise, and the scenes that deal with the social pressure are by far the strongest. The closing shot of Sang-hoon screaming for help in the darkness, to no response, is legitimately spooky and effective. Unfortunately the constant focus on Tae-ho completely undermines this. Tae-ho is so comically outrageously dangerous it begs the question of why no one in the apartment complex is scared that he might come back.

That much is easily explained actually. In the real world, normal people can in fact ignore a murderer and face little consequences for it. The main challenge they have is rationalizing it. That's why Sang-hoon's character arc works so much better as a case study in paranoia. Sure, the various random suspicious events in Sang-hoon's life probably don't have anything to do with Tae-ho. But what if they do!? That's good storytelling ambiguity, which can lead to the potentially intriguing twist of Sang-hoon learning that Tae-ho really is dangerous, just not for any of the ridiculous reasons he was assuming.

By making those ridiculous reasons explicitly true...well, that's the point where director Jo Kyoo-jang lost me. For those of you readers who don't especially care whether the movie's story makes logical sense, and really just want to watch Lee Sung-min mug for the camera, this movie is for you. Technically speaking "The Witness" is fairly well-done, with strong performances and great thriller action scenes. But the plot, yikes, whatever you do, don't think too much about the plot.