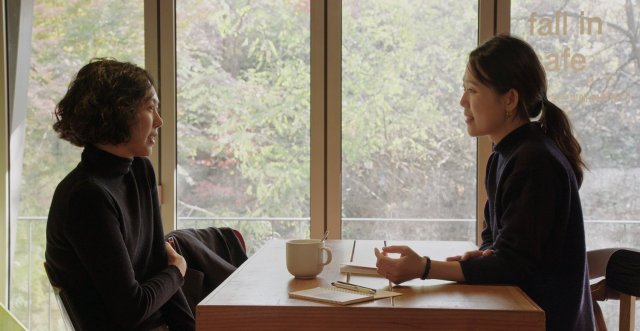 Despite "The Woman Who Run" being Hong Sang-soo's 24th film in 24 years, the prolific Korean has actually refrained from shooting a movie in the last two years, a decision that was probably for the best, since it was about time to let his fans "miss" his familiar style a bit. In that regard, the film does not do anything different from what HHS usually does, but ends up as a rather interesting spectacle.

Gam-hee is a young married woman, who has found some free time after five years with her husband, and has decided to visit three old friends who live outside the city, near three different mountains. The first one is middle-aged and somewhat tired-looking Yeong-soon, who has recently broken up with a boyfriend she had for years. Along with her flat mate, the three of them share grilled meat and makgeolli, which Gam-hee brought, and talk for many topics, ranging from chickens to relationships. That is until a neighbor interrupts them to ask if they can stop feeding stray cats because his wife is afraid of them.

Next is Soo-yeong, a pilates instructor who is also single and frequents a local bar filled with artists, being interested in a man there. Their discussions also move to other topics, until a poet whom a drunken Soo-yeong once slept with, knocks on her door, continuing a pattern that borders on stalking.

The last is young and beautiful Woo-jin, who is married to a successful but quite conceited novelist Gam-hee used to date in the past, and is eager to apologize for doing so. This time, Gam-hee stumbles upon a man.

Hong Sang-soo directs a movie that, once more, focuses on the details of everyday life, even including the mundanity that is associated with the lives of the "unremarkable". This time, his focus is completely on women, a concept that becomes quite obvious since all the men that appear in the movie are shot from their backs, with their faces barely appearing on screen. 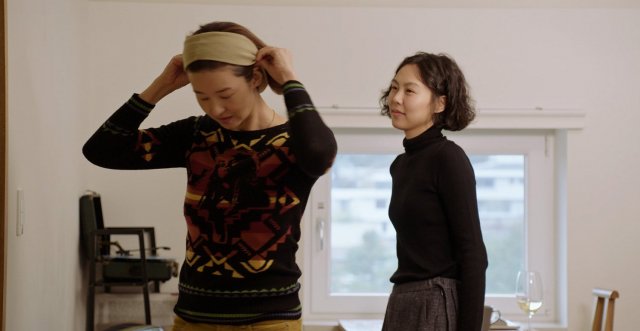 The trademark sudden, occasionally double zoom-ins are once more here, while DP Kim Su-min-I's framing is excellent in presenting the realism that permeates the film. This time, the image is not black-and-white, but considering the layouts of most of the houses Gam-hee visits, it might as well be.

Regarding the narrative, the basis lies with the perspective of the viewer quite significantly, particularly the way each one interprets the "coincidences" that appear in the movie. "If he only repeats himself, how can he be sincere?" asks Woo-jin at some point about her husband, and this could be easily interpreted as a reference to Hong's repetitive style. The famous author at some point states that his doctor told him that the angst from stopping to smoke would have worse consequences than if he continues to do so, in a scene that also highlights the director's sense of humor. The fact that the success of the four women with men is directly connected with their appearance and age could also be perceived as a comment, since Yeong-soon is completely single, Soo-yeong has an admirer, and the youngest and most beautiful Woo-jin and Gam-hee are married.

Drinking and eating once more play a crucial part, and the extensive dialogues provide the key element of the narrative, despite the fact that most of them linger towards the mundane, which could be perceived as a nod towards utter realism.

A short-haired Kim Min-hee as Gam-hee appears more desexualized than ever, but it is still a pleasure watching her sitting comfortably on a couch or playing awkwardly with her fingers during a discussion with Woo-jin in a cafe. Hong's muse, partner and permanent collaborator in his latest movies seems to have grasped completely what the director wants from her, and their chemistry is a joy to witness.

"The Woman Who Ran" is a trademark Hong Sang-soo movie, but in this case, that is just enough.