[HanCinema's Film Review] "The World of Us" 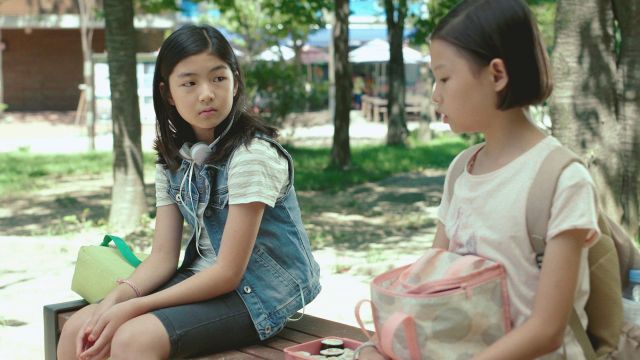 Seon (played by Choi Soo-in) is an elementary school student with no friends. Why? Well...you know, that's the kind of question asked by those who have always had friends. Most of the time people, and especially kids, can't make friends not due to some personally crippling defect but because they don't know how, and the process generally requires coincidences that are all but impossible to to recreate. Don't believe me? Ask yourself how you met your best friend and then try to figure out how you could do it again. That's the apparently impossible task Seon is faced with.

"The World of Us" is an immensely discomforting movie which on the surface level deals with childhood relationships but in reality deals with almost all of them. Here writer/director Yoon Ga-eun presents a story where bullying is more about ostracism and apathy than active disrespect. It's easier to rationalize passive jerk behavior rather than active sadism. Note how when Seon becomes victim to a prank there aren't any snickering mean girls nearby to take credit- at least that Seon sees.

But for all this Seon's home life isn't really all that bad. She has a younger brother, Yoon (played by Kang Min-joon), who is cheery, rough, rowdy and playful. Their parents are low class, struggle with money issues but are mostly successful in shielding these household problems from their children. "The World of Us" has the dubious distinction of being one of the few Korean visual narratives I've seen where empty soju bottles are not used to imply physical abusiveness.

This much is a class issue that writer/director Yoon Ga-eun rather aptly nails. While Seon's family is by no means inferior simply because they lack money, people will latch on to the most trivial, ridiculous reasons to treat others with disrespect. Seon is stuck in a cycle of never really being good enough because long ago she was hit with the label of friendless outsider and can't really do anything to change that.

The most uncomfortable scenes in "The World of Us" revolve around Seon trying to overcome an apparently inexplicable chasm that has appeared between her and the person who has come to define Seon's world. The emotional level doesn't work. Appeals to financial vanity don't work. Even acknowledgment that a prior relationship ever existed just makes the situation worse. The "right" kind of people define themselves as being intrinsically better than others in ways so manifestly obvious they clearly do not need to be explained.

While "The World of Us" is a moving and beautiful film, it is also in many ways a deeply ironic one. As an independent feature aimed at a high brow international audience, its prospective viewers likely have more in common with Seon's bullies than they do with Seon herself. But then, "The World of Us" doesn't have any pretensions of giving us any great answers or solutions to the mysteries of life. It practically ends mid-scene in full acknowledgment of the fact that yes, life will go on- just a tad more cynically for all involved parties.

"The World of Us" is directed by Yoon Ga-eun and features Choi Soo-in, Seol Hye-in, Lee Seo-yeon-I and Kang Min-joon.

"[HanCinema's Film Review] "The World of Us""
by HanCinema is licensed under a Creative Commons Attribution-Share Alike 3.0 Unported License.