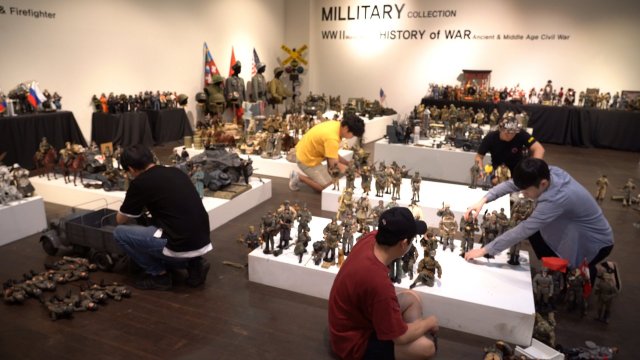 Director Son Won-kyung is one of the better known toy museum proprietors in South Korea. His toys have featured in multiple exhibitions in South Korea. The story as to how he came to this role is both convoluted and sad. Back when he was still a child, Son Won-kyung's father was often away from home, working in the United States leaving his wife and son behind. To compensate for his absence, Son Won-kyung's father wrote many letters and bought many toys for his son.

What starts out as a love letter to his father turns sad when Son Won-kyung's father petitions for a divorce. At this point the documentary goes in on patriarchal resentment. Son Won-kyung did not then, and still does not now, understand how his father could have betrayed his mother. Son Won-kyung looks at his mother in a new light, as a kind, self-respecting, self-sacrificing woman who for all her personal problems did not tell her son to hate his father.

"They Kill My Mother" works surprisingly well as a companion piece to "Welcome to X-world" with similar quintessentially Korean family dynamics but very different conclusions. Where "Welcome to X-world" featured director Han Tae-hee deriding marriage as an inherently patriarchal institution, Son Won-kyung resolves to do better. Throughout major life events his mother is proud of Son Won-kyung, who becomes a father himself and creates monuments to the toys he was given in place of love.

You might be wondering why this documentary is titled "They Kill My Mother" particularly as this is not an accurate translation of the Korean title. Well, that's because Son Won-kyung turns the latter part of the movie into a conspiracy theory about how the Kyunghyang Newspaper killed his mother. While Son Won-kyung's loss is lamentable, the argument he presents is not particularly persuasive. The whole focus comes off as rather petty, going so far as to cheapen his mother's image as a strong woman who triumped through adversity.

This questionable narrative decision isn't the only mistake novice filmmaker mistake Son Won-kyung makes. We are shown very many letters on-screen, but are never given enough time to really read any of them. The toys have the same issue. Every so often we get a collage of both the toys themselves as well as the weird artwork they inspire yet we only have a few seconds to admire them on-screen. "They Kill My Mother" is a movie badly in need of a pause button.

These structural issues are frustrating, but perhaps unavoidable. "They Kill My Mother" is such a labor of love, in every possible meaning of the word, it's hard to imagine that Son Won-kyung would ever consent to an editor seriously altering the work. Nevertheless "They Kill My Mother" really needed a more objective eye and a willingness to linger on the details. Among other things Son Won-kyung blazes right past the 2015 labor protests against then-president Park Geun-hye, an interesting event in its own right that badly needed more context aside from how it affected his toy exhibition.

"[HanCinema's Film Review] "They Kill My Mother""
by HanCinema is licensed under a Creative Commons Attribution-Share Alike 3.0 Unported License.