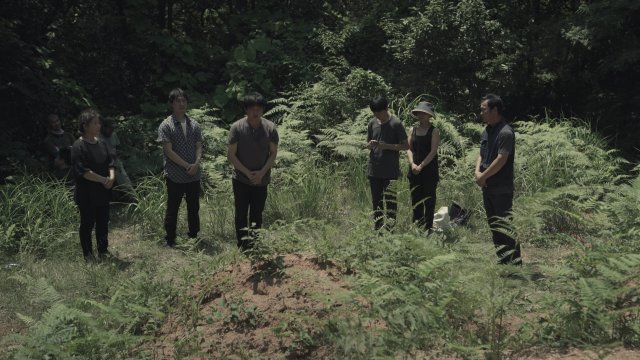 Jin-moo (played by Kwak Jin-moo) is a thirty-six year old machinist who lives with his mother Sook-nyeo (played by Byun Joong-hee) in a small housing unit with mold on the walls. Jin-moo is a schlubby man and an unlikely protagonist, but then that's where the realism comes into play. "Tiny Light" is neither infused with romanticism about the lives of working people in South Korea, nor is it overly cynical about their fate. Director Cho Min-jae makes this movie about the persistence of memory and what Jin-moo has to lose by it.

The sublime nature of Kwak Jin-moo's performance is what really elevates "Tiny Light" into something special. Jin-moo is a man entirely at peace with himself. The somewhat mean comments I made regarding Jin-moo's schlubbiness are not my own invention. They are, on occasion, commented on in the movie itself. There's the odd comment about Jin-moo still being unmarried, and the impression is not given that Jin-moo deems himself especially attractive. And yet he quietly endures.

One of the queerer elements in "Tiny Light" is how Sook-nyeo is more likely to express anger at the apparent injustice of the entire situation than her son, who's just accepted what might happen and is preparing accordingly. That Jin-moo is an excellent son, and not the manchild he initially seems to be, was an initial impression director Cho Min-jae very excellently made me feel guilty for having. There's a lot to envy about Jin-moo's life, even if it doesn't look particularly enviable.

Jin-moo himself comes to this conclusion as the movie goes on, with the casual, grainy camera footage he takes of his family showing sincere joy between people who aren't really great talkers. There's also the recurring motif of returning to the burial mound of Jin-moo's father. We're left to ponder who this man was that his small, dedicated family is still making the pilgrimage to his grave site all these years later. Yet the characters say nothing all that remarkable about him.

We can still infer a lot about the man. His stoicism resonates with his three adult children. We see Jin-moo calm down and express patience with his at times exasperated mother, a woman who is herself generally stoic yet prone to justified emotional outbursts. Though nominally Jin-moo's story, "Tiny Light" has quite a bit to say about the roles mothers play with their adult children, and the messaging is bittersweet. In the end all mothers really have is their children, and having so little to begin with, Sook-nyeo is understandably frustrated about losing even that.

But the parts about "Tiny Light" that will stick with me the longest are the ones featuring long, drawn-put, quiet cinematography. The indistinct region of Gyeonggi province where the characters live is never clearly identified nor does it really need to be. These locations are special only to the extent that they hold emotional value for the characters. In this way, they also reminded me of special places in my own life, meaningless to anyone else save for possibly my closest family.