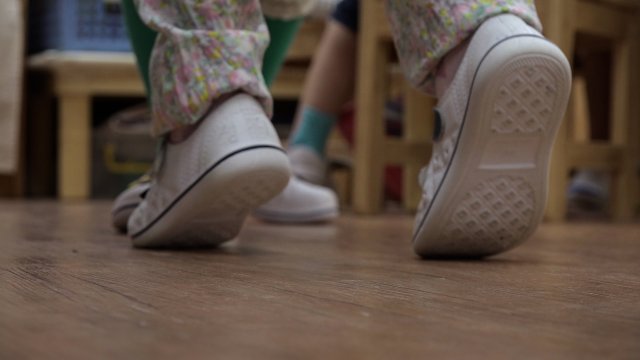 One day, director Kwon Woo-jeong had a daughter. For the most part the interactions between mother and daughter in "Tiptoeing" are adorable, and seem well attuned to the idea of showing just how rewarding it is to have a child. But conflict, and indeed the whole premise of the documentary, comes in the form of the daughter continuously walking on her tiptoes. Apparently this is a symptom of cerebral palsy, or so Kwon Woo-jeong is told when the concerned mother asks a doctor about the behavior.

From there "Tiptoeing" becomes fraught with the experience of Kwon Woo-jeong attempting to fix her daughter, with the question left constantly ambiguous as to what exactly this is even supposed to mean. Kwon Woo-jeong's daughter herself is bewildered by her mother's adamant insistence that she walk with both feet on the ground at all times. She's a child who just thinks that it's comfortable to walk like that every once in awhile. So what's the problem?

This simple contrast in attitudes is the thematic core of "Tiptoeing" as director Kwon Woo-jeong extrapolates this conflict to basically define the entire mother/daughter relationship. Mother knows what's best, and daughter doesn't understand why. To her credit, director Kwon Woo-jeong does not necessarily presume that her obsession with her daughter's tiptoeing behavior is correct. We see her fight with her husband over the subject, and some particularly unflattering scenes show the mother engaging in behavior toward her daughter that borderline qualifies as abuse.

The main redeeming qualities of these moments is that we can clearly see that Kwon Woo-jeong is concerned first and foremost with her daughter's well-being. I thought it was particularly interesting how the documentary is structured in such a way that the most unambiguously positive expressions of motherhood are frontloaded. This gives the impression that Kwon Woo-jeong is terrified of losing her happiness, and falls into the tiptoeing obsession in part because the tiptoeing seems like an existential threat to the daughter that is now her whole world.

Kwon Woo-jeong is only really able to recover herself mentally when she transitions to preparing for the worst rather than obsessively trying to prevent it. And as it turns out, the worst isn't really so bad. As Kwon Woo-jeong starts to talk to relevant long-term care professionals, and also adults with the condition, it becomes clear that cerebral palsy is actually a fairly managable illness. Her daughter may or may not exhibit any symptoms beyond tiptoeing, assuming she even has the condition at all.

"Tiptoeing" is at its finest when its just being a blunt demonstration of what it's like to be a parent. We see Kwon Woo-jeong in functional ecstasy and practical delirium, with highs and low determined entirely by the perceived well-being of her daughter. The documentary is very prescient about just what a person should be prepared for emotionally if they're going to have children. Because let's face it. Even if it's not tiptoeing, everyone's kid shows a symptom of something potentially dangerous sooner or later.