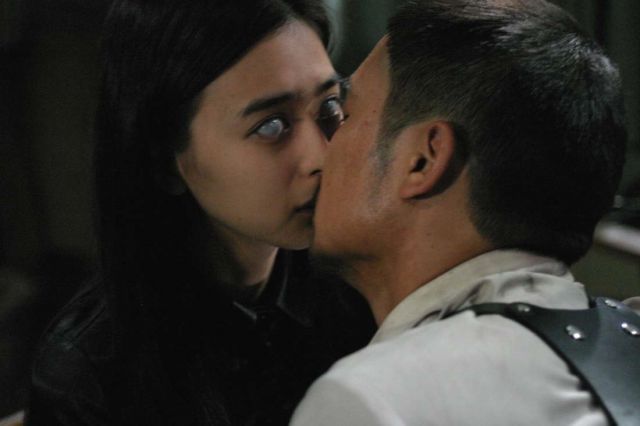 The set-up for "To Catch a Virgin Ghost" is pretty simple. We have three factions who are after some precious diamonds. Seok-tae (played by Kwon Oh-jung) stole them. The farmers Seok-tae randomly crashes in to are smarter than they look. Lastly, Yang-i (played by Im Chang-jung) is Seok-tae's fellow gangster, and his small team of enforcers aren't leaving until they get what they came for. That synopsis isn't quite as dire as the movie is in context. Seok-tae's ridiculous fashion choices make it clear fairly quickly that the tone is intended to be comedic.

Although it's gallows humor to be sure. None of the three original factions are all that sympathetic, considering that they are all liars, sociopaths, and brutes. That is, until the evolving plotline and their interactions with the mysterious fourth, possibly supernatural faction provide extra color enough to the characters that we can properly identify the good guys. But then, how much does character sympathy really matter in a broad comedy that involves several characters stripping naked and running panicked through the woods based on questionable advice?

Because that's the kind of ambience "To Catch a Virgin Ghost" is going for, sometimes within even the same shot. I am of course thinking of the scene where Yang-i reflexively goes into fighting stance and it's hard to escape just how ridiculous he looks, with knives akimbo and butt thrust out. From what we see of Yang-i's fighting skills, the stance is indeed probably necessary. But still. The whole situation is inherently undignified.

That's what makes the farmers funny, even as they are largely relegated to a straight man role. They simply refuse to take any form of existential threat seriously, mostly because they've been around the block well enough to know that they are not actually facing any kind of existential threat. Proper preparation and reaction can render nearly any initially obviously awful situation into something that can somehow be salvaged.

Observe their increasingly morbid reactions to Seok-tae. It's hard to tell whether they're simply being sadistic and all-powerful or whether they're just being very clumsy helpers. Taken in concert with the wistful stupidity of Yang-i and his poorly functioning crew of gangsters, behavior that would be obviously vicious in a more serious film comes off as hapless slapstick in "To Catch a Virgin Ghost" as we're left to ponder the movie's very odd genre blend. There's the gangster comedy, the quirky rural homestead, and even the haunted orphanage all wrapped up into a single product.

It's fortunate that the jokes tend to be more hit than miss, since the only particularly distinguishing aspect of "To Catch a Virgin Ghost" is its sheer weirdness. There's a character here whose main purpose is to phrase statements in an awkward and stupid way, forcing detrimental actions that probably could have been avoided. Then there's the comically cavalier attitude the whole production has toward death, in the service of a pretty mundane story about trying to locate diamonds. "To Catch a Virgin Ghost" is difficult to describe, yet easy to understand- and I still can't decide whether that impresses or confuses me.

Available on DVD and streaming from Amazon

To Catch a Virgin Ghost DVD