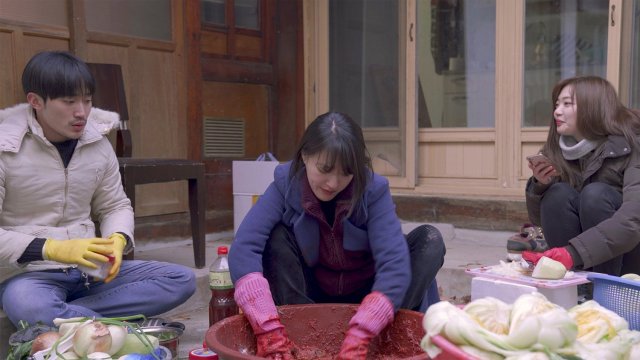 In the first film of the "Today Together 2" omnibus Jong-hwan (played by Ki Joo-bong) lives the life of a borderline hobo, eating only food that ranges in price from cheap to free. His son, Do-jin (played by Park Se-jun) is repulsed by his father's attitude, even as he himself is about as incompetent when it comes to obtaining a proper place in society. And so it is with all the other stories in "Today Together 2" that seem to discuss families on the margin but then, what are the margins anyway?

For a sense of perspective the second short depicts three adult children making kimchi in the absence of their mother, who has since moved to Africa. Dashikis make a prominent appearance. Much like the first story, there's an intriguing trend shown here of parents who actually turn out weirder than their children. For whatever reason, they can't adapt to modern Korean society, and are thus shown to be aloof and indifferent to that society's expectations.

In the third short, this is typified by the parental figure Sang-woon (played by Lee Sang-woon) who lives with wild crazy hair and has had some sort of ambiguous falling out with the mother of his teenage son, Joon-seop (played by Lee Hyun-mook). The great irony is that Joon-seop loves Gundams, itself a niche hobby, but one that's symbolic of actual priorities. It's not at all clear what Sang-woon even wants out of life, and in a truly bizarre ending Sang-woon attempts to relate to his son the same way we are led to believe he related to Joon-seop's mother- ineffectually, but with definite effort.

The fourth short sort of breaks the theme a bit, because here our protagonist Hyeon-hee (played by Hyun Tae-kyung) is a blind woman. In the most visually intriguing flourish of the omnibus, long portions feature Hyen-hee relating to her young son through visuals of touch against a black background. It's a fascinating gimmick, to the point I was starting to wish that the whole short would just consist of these visuals contrasted with her loving voice, despite the whole concept being somewhat anti-film.

Hyeon-hee's son can see, though, which brings the project into full focus. "Today Together 2" is a movie about how we can't really understand our parents, nor can we understand our children. The generational gap by nature forces us to have different priorities, since we have different ideas as to what's important. The characters in "Today Together 2" wallow in nostalgia, and can only truly break free from unrealistic expectations by acknowledging the difference in life experiences.

This is how rapprochement is achieved in all the stories we see. Do-jin realizes the world really is out to get his father. The three siblings realize that even if they don't get their mother, they do get each other, since they all have the same eccentric mother. Joon-seop comes away with a better appreciation for the women in his life, and Hyeon-hee appreciates the present with her young son even as the past and future remain ambiguous. It's touching stuff.