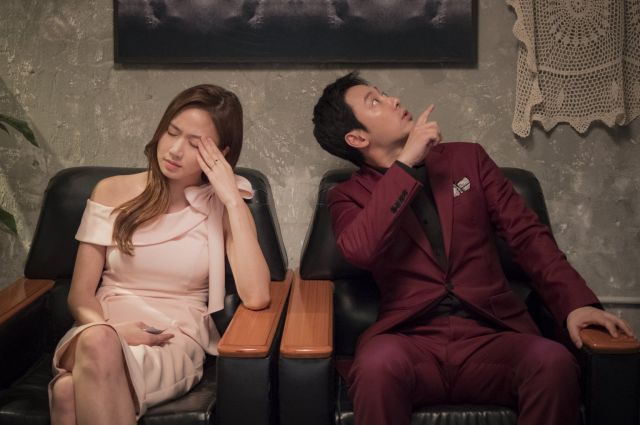 In the cute animated opener for "Trade Your Love" we learn, among other things, that leading man Seong-seok (played by Kim Dong-wook) has a girlfriend. Hye-jin (played by Lee Chae-eun) is divorced, and thus unacceptable to Seong-seok's genteel family. This fact, coupled with how Seong-seok and leading lady Hae-joo (played by Ko Sung-hee) don't have much screentime together, quickly emphasizes how the contract marriage really is fake. Save for inertia, there's no real reason for Seong-seok and Hye-jin to actually go through with it.

The pacing of "Trade Your Love" was really off to me until I finally figured this out. Given the way the marketing has promoted and emphasized the whole three year period of the contract, you would think that most of the movie takes place during the contract period. Actually the moment "Trade Your Love" is building up to is the wedding itself. The movie is less about married life and more about how friends and family react to marriage announcements, and how Seong-seok and Hye-jin find that experience very inherently unpleasant.

"Trade Your Love" is an unromantic comedy. The idea, while certainly unique, is not an easy one to get across. I can understand why the marketing instead just gave up trying to communicate the movie's actual premise and made it look like a generic contract marriage story. I can understand it, although it was still a dumb idea. "Trade Your Love" is also technically an art house extension project that really should have been aimed at a higher audience in the first place.

Which brings me to the movie's actual content. In "Trade Your Love" we repeatedly watch setpieces wherein Seong-seok or Hae-joo (but almost never both at the same time) exposit their marriage to people in an effort to be left alone. Seong-seok and Hae-joo are bitterly misanthropic characters. They both want to escape overseas to get away from their generally obnoxious friends and family, they just don't want to do so in a particularly rude way.

How much you'll like "Trade Your Love" depends entirely on how funny you think it is that we are constantly being introduced to new characters with annoying quirks that the leads are trying to escape from. In these scenes, Seong-seok and Hae-joo struggle to get a word in edgewise. Although really, most of the time they're just looking to end the conversation and move on. Sadly, since nearly every setpiece in "Trade Your Love" follows this same pattern, we are never so lucky as to get a reprieve.

These moments are kind of funny, sometimes. But because the non-lead characters are such caricatures it's difficult to get a sense of any dramatic weight. Hye-jin is the only secondary character who gets a sincere emotional reaction to anything that happens and consequently is the only member of the supporting cast who feels like a real person rather than just a walking farce. By trying so hard to be funny, "Trade Your Love" misses as often as it hits.