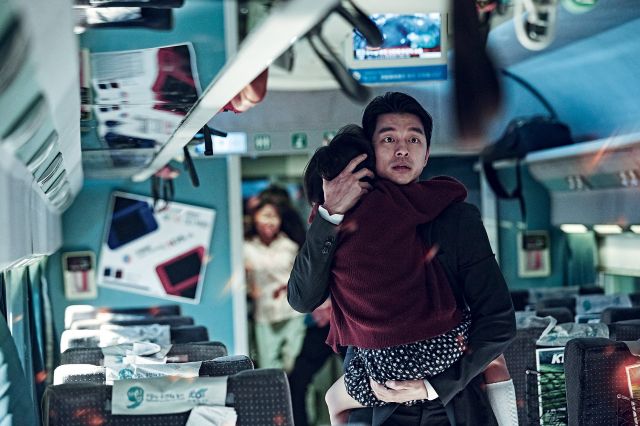 The first zombie to show up in "Train to Busan" comes from a rather unexpected place, and is creepy in a way zombies seldom are, although in retrospect the idea is so obvious it's a wonder no one thought of it sooner. That's the general pervading sentiment behind "Train to Busan". By cutting out the usual pointless worldbuilding and focusing on a small group of relatable characters in a disaster situation, writer/director Yeon Sang-ho creates an astonishingly powerful piece of film. "Train to Busan" is both thrilling in the traditional action blockbuster sense as well as thought-provoking in the "what would you do?" vein.

Seok-woo (played by Gong Yoo) is the everyman of the story, a well-paid yet emotionally distant father whose daughter Soo-an (played by Kim Su-an) is in desperate need of closer attention. The question is, how? Initially Seok-woo thinks that the best way to be a father to Soo-an is simply by being a father to Soo-an- and no one else. But as the central zombie catastrophe in "Train to Busan" gets worse and worse, Seok-woo comes to realize that such selfish short-sighted attention is inherently inhuman.

Metaphorically, it's what separates us from the zombies. Think about it. While the zombies in "Train to Busan" are initially quite terrifying, it soon becomes clear that they have some very glaring, easily exploitable weaknesses. So why do so many characters in "Train to Busan", military personnel included, fall victim to the horde? Because they stick to the status quo. They don't adapt their thinking to the evolving situation. Single-mindedness is both the zombies' greatest strength and the humans' greatest weakness, because only one of these groups is designed to use that strategy effectively.

The thematic underpinning of "Train to Busan" is brilliant, and the special effects are no slouch either. Lacking any live action credits, writer/director Yeon Sang-ho excels in a quality too many mainstream film directors lack- an attention to immediate context. There's a big a focus here on using the inherently unrealistic nature of zombie design to enhance the fear rather than detract from it, coupled with showstopping visuals when they matter the absolute most.

The actors too, give real punch to the proceedings- literally, in the case of Ma Dong-seok, and metaphorically for everyone else. Observe how the characters in "Train to Busan" are mostly useless when acting self-interested, yet terrifyingly effective when acting in concert as part of a mutually supportive team. Self-sacrifice is honored as a virtue even when saving everyone obviously can and should be the first priority.

The contrast with "Seoul Station", the animated film from writer/director Yeon Sang-ho which inspired "Train to Busan", is equally marked and intriguing. Excellent individually, viewed together the two films are exceptional as two sides of the same coin- nihilism versus optimism, an exploration of what happens when the worst of humanity prevails versus the best. A ScreenX enhanced preview of "Seoul Station" plays once the credits for "Train to Busan" finish rolling- and I can only hope both movies reach the wider acclaim and audience they so richly deserve.