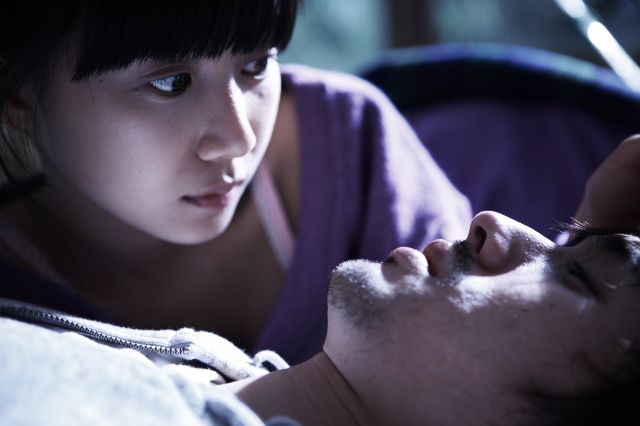 Jeong-min (played by Yoo Ha-joon) is struggling both in film and his personal life. After a sexy but rather uninspired bit of lovemaking, Jeong-min mostly just wallows in self-pity about how much of a failure he is. From there, Jeong-min gets the idea to try and inspire his creative juices by going to the middle of nowhere and stop worrying so much about modern troubles. So instead, he deliberates over whether or not to have sex with a teenage girl.

In all fairness we are talking about a fairly sexy teenage girl here. Director Bong Man-dae makes good use of his experience with pornography and makes lead actress Jung Min-gyul look like a total bomb while barely showing any actual skin. It's all in the presentation. Jeong-min is lonesome, he can use sex to solve his self-esteem issues, and what do you know, a girl just so happens to show up who's very sexually enticing it's just that, you know, she's a minor.

The main problem with "Trap" is that it plays its hand too easily so we know what the twist is going to be. Mostly this is the fault of the title. Anytime Jeong-min thinks to himself about whether or not this is a good idea I just felt like, hello, the movie's called "Trap" dude! Of course there aren't going to be magical sexy times at the end of this road! Besides, Jeong-min isn't really a very good person anyway. When he finally gets seduced by a moralistic excuse...all right, as a general rule, having sex is never an acceptable alternative to calling the police.

Although more than being about plot "Trap" is really about teasing. There's the literal teasing as Jeong-min is constantly being tempted. Then there's teasing the audience, because while the opening promises sex, there's not actually that much in the runtime. By the time Jeong-min finally gets his underage sex, it's already really, really obvious that everything's going to end terribly because every layer of the situation is more suspicious than the last. And also the movie's called "Trap".

As far as an artistic defense goes- well, "Trap" is about temptation, and the excuses men will make in order to get what they want. One conversation explicitly delineates this, as a group of men debates the finer points over whether or not it's really fair to say that having sex with a minor is rape. After all, back in the old days grown men had sex with teenagers all the time and that wasn't bad, right?

Another good general rule- anytime you're having a conversation like that, chances are everybody in the room is just a really gross person. That's the context with which "Trap" moves toward its inevitable conclusion. The plot isn't exactly filled with surprising exciting twists and turns, but this story is really more about presentation than anything else. "Trap" is pretty upfront about the kind of movie it is. Tawdry, slow, and sophisticated in its lack of sophistication.