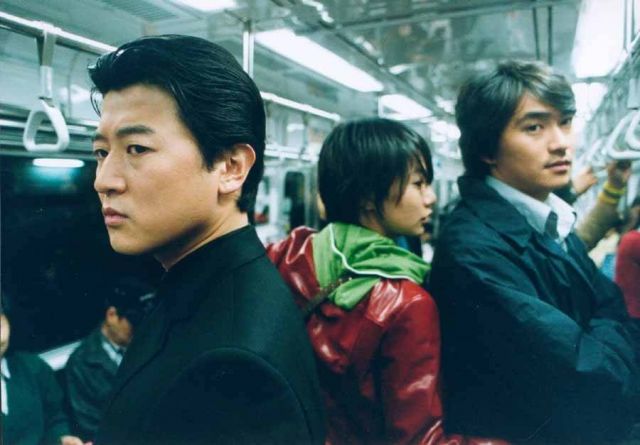 Gi-taek (played by Park Sang-min) is a terrorist who spends the opening sequence of "Tube" blowing a lot of stuff up with his team. I wasn't sure what he was doing or why he was doing it. Shoot, I wasn't actually sure who the leader of the group was even supposed to be since the whole scene was just constant gunfights and explosions and something about an important data file or whatever. Allegedly these events have something to do with the subway heist that makes up the bulk of "Tube", although even after having seen the full film I'm not so sure about that.

But then, before we get to the subway heist, more characters. Do-joon (played by Kim Suk-hoon) is a subway cop who doesn't play by the rules. Which is a bit of an odd idea, because how many rules are there for a subway cop to break? The subway is not, in normal circumstances, the kind of place where you expect to find mastermind criminals. The closest we get to that is pickpocket Yin-gyung (played by Bae Doona) who is...sassy, is about the only character trait I can come up with.

"Tube" is filled with thinly exposited characters like this who have, at best, a few distinctive personality traits, none of which are all that relevant to the actual story except in the vaguest possible way. We also have other, less competent pickpockets. Probably corrupt public officials. There's a subway technician and his subway-riding wife who've been married about a year and still act really cutesy.

The aforementioned couple are among the least important characters in the movie- the technician never does anything and his wife is just a generic hostage. Yet those few cutesy moments are more distinctive than anything the alleged main characters do. Do-joon has a lot of flashbacks about how sad he is, and also why he never lights cigarettes. Gi-tak rambles sometimes about how the politicians sold him out. The pickpockets pick pockets.

There's nothing remotely memorable or interesting, is what I'm getting at. "Tube" is an extremely formulaic action thriller, the kind where random comic relief is consistently able to outstage infinitely more expensive action setpieces simply by virtue of having more personality. The actual plot is so consistently dour that "Tube" can't even manage to hit basic levels of camp. Instead, the movie has to constantly resort to contrivances to delay the inevitable final battle between Do-joon and Gi-taek, and then struggle to explain why the movie still isn't over when one of the two is finally dead and gone for good.

I guess I could praise "Tube" on the technical level, but be warned that the sophisticated technology on display here is quite dated and obviously fake. In between that, the clichéd script, and the rather weak performances, "Tube" is little more than a curiousity. The main compliment I can give this movie is that it is never offensively stupid. Conceivably a sufficiently bored person could be entertained by it. But alas, I was not sufficiently bored when I watched it.