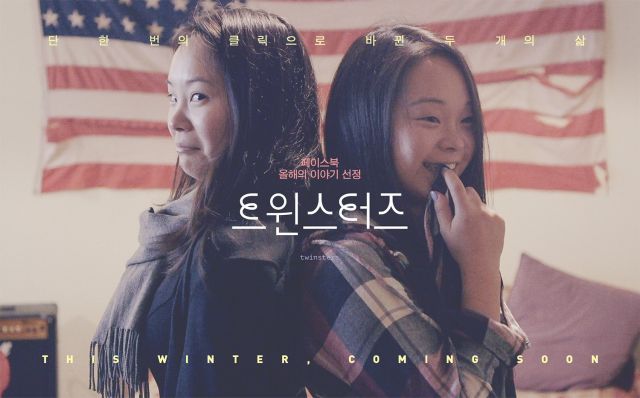 Samantha Futerman is an American actress- somewhat more successful than most, given that she's had speaking roles in a couple of movies you've probably heard of. She also shows up in YouTube comedy videos. And that's where the story of "Twinsters" starts- see, Samantha Futerman was born in Korea and adopted overseas. Through an Internet video, Anais Bordier, another Korean adoptee raised in France, sees Samantha Futerman and discovers, to her shock, that the two appear to be identical.

There's not really that much to "Twinsters". As is pointed out at one point, Samantha Futerman and Anais Bordier are so identical, right down to the annoying popping sounds, that it's difficult to seriously entertain any possible hypothesis except that they were identical twins separated at birth for unknown reasons. We never do find out those reasons, mainly because giving up a child for adoption is such a painful experience that not everyone wants to talk about it.

But never mind the sad stuff. "Twinsters" is a documentary chiefly concerned with vitality and the celebration of life. Samantha Futerman, a true child of her generation, makes video footage of as much of her interactions with Anais Bordier as possible. Edited together into the final film, "Twinsters" is a story about a powerful sisterly bond that pops out of nowhere because that's what it's like to meet your life partner.

Normally that's the kind of phrasing that would be used for a love story, and that's exactly the kind of story "Twinsters" is- it's just not romantic love that's under discussion. Sisters too, can have strong emotional bonds. It's just not a fact that pops up because sisters are, you know, normally raised together. So the meetings between Samantha Futerman and Anais Bordier end up being this weird sort of looking glass where one sister always knows what the other is thinking, even though she can't really explain why.

It's a very magical feeling- cute, while seemingly impossible. That's the overall sentiment which radiates throughout the documentary's production. Observe how even the computer graphics have this extremely bright breezy tone. The simple digital avatars for Samantha Futerman and Anais Bordier constantly show off that same feeling of cheerful excitement, practically popping off the screen.

"Twinsters" is a story that spans all around the world, from Europe to America and finally back to Korea again. Travel alone isn't the object, though, but rather self-discovery. Samantha Futerman and Anais Bordier are excited about the prospect of learning so many new things. They're solving mysteries that never really felt like mysteries before, and therein lies the joy in living.

If there's any weakness to "Twinsters" there is the mild issue of the movie not really being much more than the sum of its parts. Well, that's how "Twinsters" was pitched at Kickstarter from the first place- as the story behind a weird novelty anecdote. Still, I can hardly fault the film much for succeeding on its relatively unambitious promise. "Twinsters" knows how to pop when it counts, and that's good enough for me.