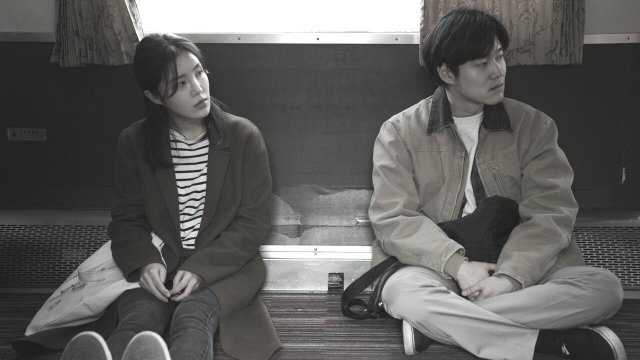 In the first segment of "Two person at the same town SE2" a man tries to sell a bicycle to a woman who answered his ad. The scene's interplay is weird. The two are strangers, engaged in a monetary transaction. But the story quickly degenerates into ambiguous flirting- because when dealing with the opposite sex, flattery is one of the surest ways to get a good deal. The single shot story is mundane yet nearly documentarian in its realist depiction of how people buy and sell secondhand bicycles.

The second segment continues this line of realism with its depiction of a woman and a man on a train having a casual conversation that doesn't seem to actually be going anywhere, even as the train itself has a definite location in mind. This, too, is a startlingly accurate portrayal of what it's like to try and make small talk with strangers. Which is to say, there is always suspicion bubbling right under the surface about why anyone would want to have a casual conversation on the train.

By the third segment this theme of strangers appears to have been abandoned as the one-on-one single shot conversation this time is between an actress and the man trying to talk her into doing something...very strange. And it was at this point I realized that all of the various shorts of "Two person at the same town SE2" were weird gimmick stories. The longer the omnibus goes on, the weirder the stories get.

That's how we get to extremely abstract and vaguely religiously minded fourth story, where a church garden becomes the omnibus backdrop for an inquisition into how much a person really knows about themselves, and their ability to deal with contradiction. Yes, that sentence was a bit nonsensical but so was the segment itself. The creepy subtext begs a lot of questions which aren't easily answered or thought about, since we're straightaway taken to the next section.

And the fifth story takes this idea even further with a conversation that has no actual point at all- it's just a couple of younger people hanging out at a playground asking questions. This setpiece is the most meticulously staged of the bunch- it maintains the single shot shooting style of the previous pieces. But it concludes with exposing a surprisingly subtle editing trick that says quite a bit about just why it is that people like to have serious complicated chats at playgrounds.

The final segment abandons the single shot camerawork, and technically even the pretense of a conversation. The whole thing is just straight up stream of consciousness jumping between the poetic thought process of a man and woman narrating a chronic indirect shares experience, with all the hopes and realizations that come from it. The idea is very overarching and even epic in scope. It is simultaneously, a very strange place to end an omnibus that started out with a used bike sale while at the same time feeling like an all too appropriate evolution of the simple idea of one-on-one conversations between people in the neighborhood.