[HanCinema's Film Review] "Unbowed": A Man, a Cause, and a Crossbow. 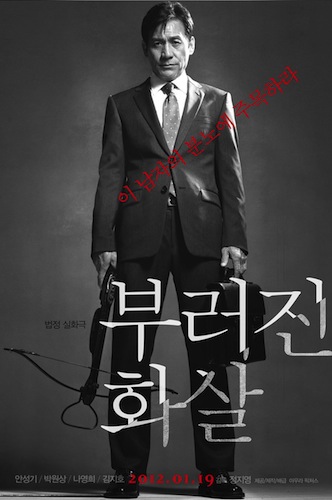 The Korean justice system has long endured a painful portrait when it comes being represented on the big screen. Korean cinema has generally targeted public authority figures such as corrupt cops and public prosecutors, self-preserving judges and politicians, as well as other devious public authority figures. Chung Ji-young's "Unbowed" follows a determined civilian as he fights his way through Korea's judicial system; only to eventually pick up his crossbow, point an arrow and the nearest judge, and let loose.

Ahn Sung-ki plays the accused, the stubborn, self-sacrificing and brilliant professor Kim Kyeong-ho. After diligently pointing out a critical error in his university's math exam, Seong-gi's trys to do the honourable thing in revealing the mistake to the students. However, his efforts are rejected and the faculty decides on keeping the error to themselves. Kim's impeccable character and unquestioning honour does not allow himself to accept their decision, and his defiance ultimately results in legal action against him. Unsatisfied with the result of the legal inquiry that follows, Kim takes it upon himself to 'scare' some sense into one of judges with his very convincing crossbow.

This might seem like a 'man versus machine' affair (or, put more romantically by Kim Ji-ho's character, as a 'David and Goliath' story) but our protagonist's is so well versed in judicial law that the irony/incorrectness of this assumption soon becomes as apparent as the film's own socio-political call for justice. However despite being in possession of both an ineluctable moral compass and infallible persuasive arguments, Kim does require a defence attorney in order to be represented in the courts.

Park Joon (Park Won-sang) is an alcoholic lawyer who fell from grace after his involvement in a separate human rights protest turned ugly. His practice is only just intact but his past actions as an activist for change still haunt him. After he realises that he could lose everything if he doesn't take Prof. Kim's case, he puts down the bottle and gets on with the job. Park Won-sang's performance contributed to a lot of the film's electric courtroom scenes, as Kim and himself relentless tear into the courts handling of the evidence and proceedings. There is great sense of symmetry and balance between these two as their histories and actions subtly punctuate their interactions, giving much needed depth to what follows. There is even a whiff at father-son relationship forming through the two's legal knowledge and shared experience with the system. Both were 'victims' of the laws they sought to see honourably validated, and together they work to expose the, rather obvious, injustices tainting the professor's trial.

It is perhaps my duty to say that "Unbowed" is based off true events. However the specifics of the case are unknown to me and it does, unfortunately, cast an unfavourable light onto the ethical decisions evident in the film's construction. It is make clear in the film that this man is, in fact, innocent and is himself a victim of a crime pressed on him by the legal system and its malleability. Throughout all the questioning and cross-examinations "Unbowed" seemed unwilling to present any worthwhile angle or suggestion that this man did actually point a loaded weapon at a judge. It's there, but very well wrapped in that lovely tension I described earlier, as well as through the film's own diminution of events as the audience, like those found in the courtroom, cry, shout, and scream for justice.

I am excited to see what comes next from In Chung Ji-young, his next two films ("National Security" and "Ari Ari the Korean Cinema"), both sound as refreshing and daring as I found "Unbowed" to be. Like any courtroom drama, this one relies on its acting and strong dialogue, an area it had no problems with service delivery. Memorable moments and lines such as Park's words to Kim after one of their appeal: "Do want to win this trail or pick a fight with a judge?" and then "thanks to you, we're further away from winning". These and other lines attempted a touch of sophistication rarely seen in Korean dramas such as this.

Other moments in the film were also rather unpolished and their grain really showed. It was frustrating to leave another great courtroom clash, only to have it followed by a disturbingly self-reflexive "courthouse steps" scene with goofy reporters, digital cameras that were clearly switched off, and dodgy diegetic flash photography. It was a mess; and although I was impressed with the legal banter and dissection of 'the law', the blatant and unashamed manner in which arguments where made and countered was insulting. Audiences should be quite savvy and sharp nowadays as to the rhetoric and types of arguments found in legal drama, but even so the dumbed down 'arguments' served only to enforce the one-sidedness of the film and its take on the incident.

Overall, "Unbowed" is one of the best courtroom dramas I've seen come out of Korea and its hiccups weren't enough for me to not enjoy or recommend this one. The acting was driven by some good dialogue and saved by the absences of some of the genre's more unflattering motifs. All will appreciate the performances, most will acknowledge the injustice, but only a few will question whether or not this one hit its mark.