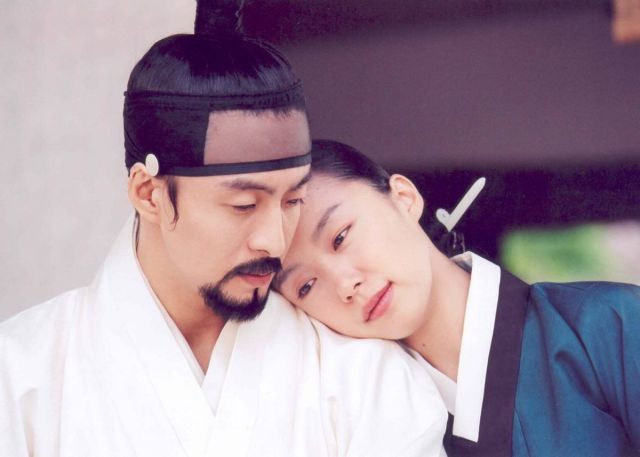 The only problem is that nearly every single character in "Untold Scandal" is a basically repulsive person. Not only that, they're so utterly brazen about it that the film oftentimes nearly passes into dark comedy. In one scene, a woman is raped. That's not an exaggeration. It's literally right there in the script- we're going to do it, you can't stop me, no one will save you. And this is tossed away flippantly a few scenes later when through the power of logical ju-jitsu the victim is convinced that being raped is actually a good thing and she should continue to meet the same man again under similar circumstances.

The closest we get to a moral argument from anyone here is that other people are more bad or equally as bad as us, so it's all right for us to act despicable since we have special deep character flaws. It's in moments like this where it must be noted that the French novel this movie is loosely based on was written right before the French Revolution, and depicts aristocrats. I imagine someone not so smug about their sexual enlightenment will find little to admire in these characters.

This irony is also well depicted in the ending. Note that even though the two leads pride themselves on defying the social system, the very way they use sex as a weapon to attack others itself relies on the social system to keep anyone from fighting back. It is, again, practically a moment of comedy when a character who has spent the entire film making a mockery of sexual morality for the sake of revenge apparently trusts another clearly angry character to respect the rules of general morality for no reason whatsoever.

But let's ignore the sex question for a moment. How's the film otherwise? Pretty darn good actually. The performances are convincing, and the sets absolutely wonderful. "Untold Scandal" is the story of a journey to a faraway place even by local Korean standards. The exoticism of the backdrop aptly coincides with the unusual behavior of the actual characters. Note in particular the absence of extras- further evidence of the clandestine nature of these characters, and how their escapades are secret mostly because no one actually cares enough to bother with personal snooping.

In many ways watching "Untold Scandal" is a bit of a mixed experience. It's not a persuasive one to be sure. Whatever your views on sexual morality are, they'll probably leave the film intact. Regardless, this is thrilling entertainment with excellent production values that in every way lives up to the advertisement. And if nothing else, the story is an unusual enough change of pace for the Korean costume drama to be worth looking into on visual design merits.