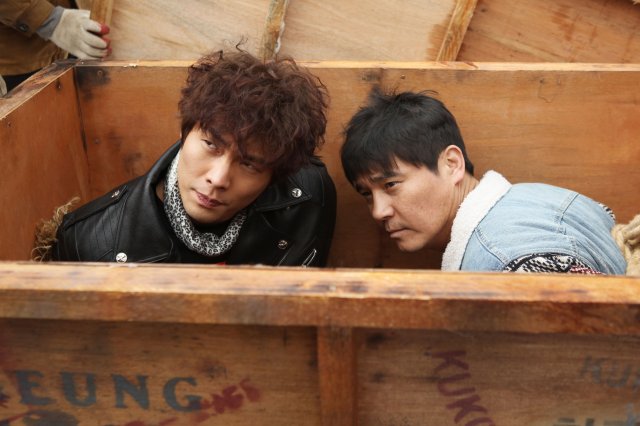 Seong-gi (played by Jang Gwang) is the charismatic leader of an extremely goofy cult that combines grandiloquent religious sermons with vaguely sexy Kpop inspired dances. South Korean police are at a loss as to the best way to deal with Seong-gi's awesome political powers. So they fight fire with fire, enlisting bombastic fighter cop Jeong-jin (played by Im Chang-jung) and horndog lover cop Yoo-min (played by Choi Daniel) to take Song-gi down. Conveniently, since both Jeong-jin and Yoo-min are loose cannons, their questionable methods can be easily disavowed.

It's easy enough to see how "Untouchable Lawmen" got made. The movie has an exceptional pitch. The obvious satirical undertones made possible by the villain, the diametrically opposed personalities of the lead characters, and the extremely open-ended premise are all loaded with great potential. So it's a bit of a disappointment how the script ends up going around in circles at about the halfway point, the production team rather obviously having run out of ideas.

It's a shame that the movie degrades to this because "Untouchable Lawmen" is at its strongest when the film is emphasizing the inherently bumbling nature of its protagonists. Yes, we are explicitly told that Jeong-jin and Yoo-min are good at their jobs, unorthodox methods notwithstanding. But that's just because Jeong-jin picks fights with dumb muscleheads and Yoo-min captures witnesses by seducing them and waiting for them to fall asleep post-coitus. Neither one of them are particularly smart, they just have one weird trick that works really really well.

When "Untouchable Lawmen" is just about investigating Seong-gi, this makes for decent cheesy gags. But once the heroes actually start to confront Seong-gi, they are clearly woefully underprepared for the task. Worse, instead of giving Jeong-jin and Yoo-min the means to succeed, the script just keeps tossing them into progressively less amusing setpieces and attempting to play the darker aspects of Seong-gi's criminal conspiracy for serious dramatic weight.

Another big issue is how Jeong-jin and Yoo-min really just don't like each other that much and never approach being friends or colleagues. At best, they just occasionally share the same goals. Again, this kind of chemistry works really well when Jeong-jin and Yoo-min keep trying to solve crimes using their one weird trick, only to be frustrated because their partner's one weird trick completely undermines their own. But this kind of mild antagonism is not at all conducive to later setpieces that are expecting us root for the plucky heroes to save the day.

"Untouchable Lawmen" is less explicitly bad as it is frustratingly forgettable. It's the kind of movie you leave on TV as background noise because every so often something visually interesting enough happens to warrant a mild chuckle. But on any closer analysis the movie's just loaded with some pretty lousy mixed messages- like how supercops who break the rules are good, but police in general are not to be trusted? And I don't know what to make of Seong-gi's sexual slavery empire in the context of racy jokes about Yoo-min's questionable attitudes towards women.