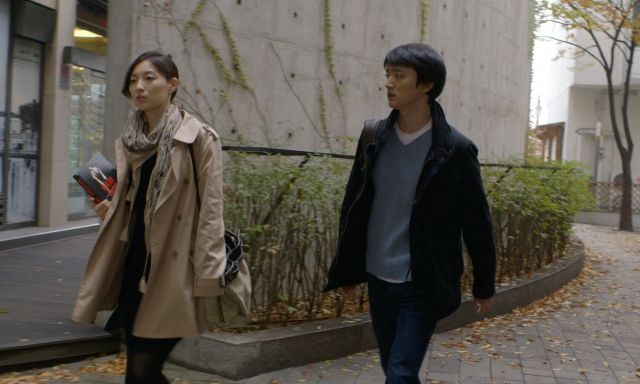 When watching a performance, we're not supposed to be privy to the real thoughts of the actor. "Good" acting means that the performer convincingly inhabits the persona of a character which in theory has no relation to his personality, although in practice this is almost never true. One argument Orson Welles made when people accused him of egotistically taking larger-than-life roles was simple. If the commanding actor had ever tried to take a role that wasn't huge, it would simply look strange.

I bring this somewhat tangential context up because it's pretty much the only frame of mind with which to understand "Upstanding Man". It explores how a borderline incomprehensible artistic play does in fact make some amount of sense when we consider the frame of mind of actor Jin-ho (played by Heo Ji-won). Essentially, the play was originally inspired by Jin-ho's subconscious frustrated feelings regarding his ex-girlfriend So-ra (played by Jeon Su-ji). And it is only by getting back in touch with those feelings that Jin-ho can understand his own artistic message and put on a good performance.

The effect is a sometimes too-subtle exploration of what actually goes into creative writing and performance. I can easily identify with Jin-ho because I, too, often forget what point I was trying to make when writing such-and-such review, such that reading my old work sometimes confuses me as to what my own thought process used to be. The right sense memory can easily bring all of that flooding back, though, although even then my understanding of the review will be different than when I originally wrote it.

If that came off as somewhat confusing, well, "Upstanding Man" overall has that same general tonal issue. Mild spoiler warning- Jin-ho and So-ra do not get back together, nor do they ever come close to getting back together. They alternate between pretending like they don't care, to occasionally snarling at each other, all while the other actors in the play / people in their lives have no idea what's going on.

These are all pretty universal human sentiments when it comes to failed relationships, yet they're rarely explored in the traditional narrative sense because "ex-couple continues to dislike each other" isn't exactly a plot. Which, of course, is why Jin-ho's play takes on the excessively abstract form that it does. It is pure feeling that only gets more accurate as time marks down to the opening night and eventually, the closing day.

Upon the film's close, I saw the words "Upstanding Man" and immediately felt that the better interpretation would be "human stands upright", as a symbolic representation of how Jin-ho and all the other actors go from pretending to be characters to being characters, by being alternate versions of themselves that only vaguely appear to be Jin-ho's characters. If that makes no sense at all, don't feel bad. I barely understood "Upstanding Man" myself, and still remain unsure whether it's worth watching. All I can write is, there's plenty to think about here in between all the nothing.