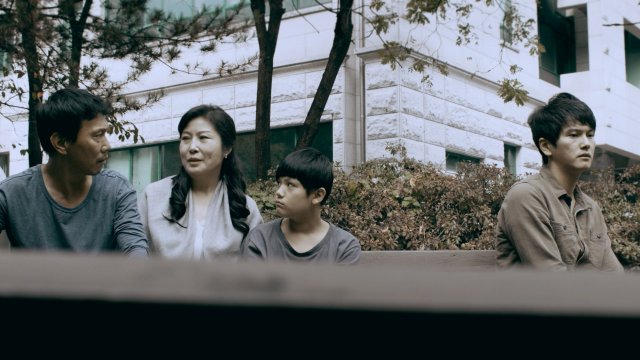 Soo-hyeon (played by Jung Ho) is a North Korean defector who works in a sparsely populated public library. Life is pretty boring in there, although every so often his boss will pop and complain about some trivial problem. Life takes a turn for the weird when Soo-hyeon starts having serial abstract conversations with other defectors who coincidentally happen to be visiting the library. And then, of course, there's the framing device of Detective Kim (played by Park Gi-ryoong) who's trying to figure out where Soo-hyeon disappeared to, and also the recurring setpiece of the fish in the fishbowl with weird colors.

"Visitors - 2019" is a very pretentious film. Except for the whole fish thing it's really more of a stage play than a film. Well, I suppose there are those moments of action which have some reasonably decent close-up shots. But even then, it's hard not to notice how the actual focus is on the highly metaphysical dialog. The people Soo-hyeon talks to exist largely as ciphers for themes of loneliness, rage, and nostalgia for a North Korean identity that lacks much in the way of meaning.

At times director Stanley Park is able to paint a startingly accurate portrayal of the hopelessness inherent in depression. The increasingly fantastical nature of Soo-hyeon's experiences, where the other people in the library feel less like actual people and more like figments of his imagination, really sell the North Korean defector experience as something basically unsolvable. Discussion of a North Korean state assassin start to feel less like a threat and more like a blessing, since Soo-hyeon doesn't have much to live for anyway.

But I don't want to risk making "Visitors - 2019" sound more interesting than it actually is. For a movie that's only around seventy minutes long the movie feels twice that length. Almost nothing actually happens. There's just a lot of discussion of events that either have already happened or might happen at some point in the future. While this allows for a very purgatorial atmophere that doesn't make the film any more watchable.

"Visitors - 2019" is also crudely enough made that its status as a film at all is a bit questionable. While I appreciate that director Stanley Park likely had budget constraints, the visual and sound quality is so low I often wondered whether he was somehow working with ancient film equipment from several decades ago. "Visitors - 2019" has the feel of old, weird, amateurish films from the sixties and seventies where sincere artistic ambition was left clashing with both technical limitations and a lack of formal training.

This does, admittedly, help with "Visitors - 2019"'s generally ethereal atmosphere. I couldn't help but be creeped out by the exterior shots, where we can hear birds chirping. Most movies don't have that kind of unscripted ambient noise, thanks to modern editing techniques. Elements like this give "Visitors - 2019" a very distinctive feeling that, while generally unpleasant, shows surprising resonance in memory.