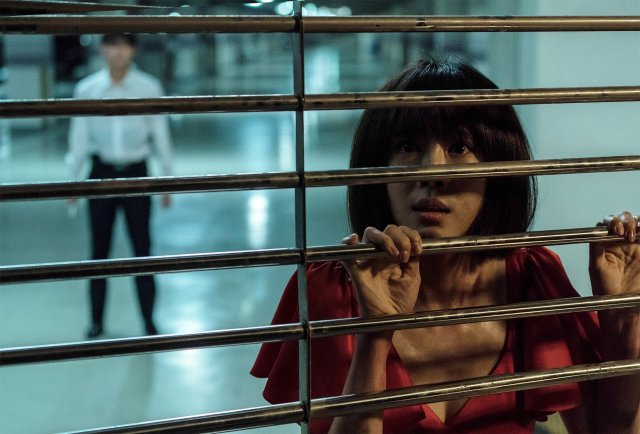 Yeong-woo (played by Kang Ye-won) is a put-upon woman in her late thirties who works in an office building. Even though it's almost Christmas, it's also crunch time, so she has to spend a lot of time at work after hours. This attracts the attention of younger security guard Joon-ho (played by Lee Hak-joo) who keeps engaging her in mildly creepy conversation. Then there's all those edited in shots we get of somebody paying very close attention to everything that happens in the building via CCTV...

The bits with the cameras were, for me, the best parts of "Watching". They're just so effectively silent and creepy. In this modern world closed circuit television is everywhere. It's not something we think about that much, and in theory, it exists to make us safer. But does it really? I also rather liked how, when an altercation with Yeong-woo's boss Mr. Choi (played by Joo Suk-tae) offers an obvious use for the footage, there's ambiguity over whether actually using it would be a good idea.

Unfortunately "Watching" is less about the titular watching and more about talking. Endless, endless talking. As in, huge stretches of the movie just feels like Joon-ho going off on these weird one-sided monologues. It's a huge relief when Yeong-woo finally stops with the whole feminine submissiveness thing and just yells at him to shut up. The problem is, after that point Joon-ho just keeps on talking, and on the rare moments when he stops, it's usually because he's run out of things to say.

Take the best exception to this rule- the elevator scene. Joon-ho is temporarily forced to stop acting so smug because Yeong-woo has figured out a way to subvert his stupidly intricate plan. I really wanted more scenes like this, where Yoon-ho is left feeling visibly impotent because his main advantage over Yeong-woo is his knowledge of the building's CCTV systems and layout, and it turns out there's limits to that advantage.

Instead, bloody violence is the order of the day. I guess those scenes are passable, if you're into that sort of thing. They're just not terribly interesting, and it's all stuff you've probably seen before if you've ever seen one of these genre movies. It doesn't help that writer/director Kim Sung-gi-I seems to think plot twists are inherently interesting. Both of the ones that show up in the final act don't really add anything to the story, and could have been easily removed.

Glancing over the plot synopsis of P2, the low budget American film that "Watching" is a remake of, it looks like both plot twists were Kim Sung-gi-I's pointless embellishment. Other changes are somewhat more intriguing. Making Yeong-woo an older woman, and also a mother, and then tying Joon-ho's obsession to the modern trend of noona romances was actually fairly clever. The problem is, that's one good idea that's only really interesting for maybe five mintues. "Watching" needed a lot more than that to be a good movie.