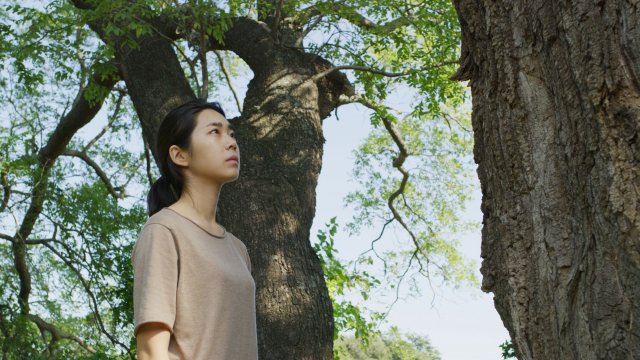 For the first several scenes of "Way Back Home - 2019" we just watch Jeong-won (played by Han Woo-yun) go through the motions of happy married life. She and her husband discuss interior decorating. Then, she goes to work as a swim instructor while he goes to work at her uncle's carpentry shop. Their home is not idyllic, but it's seriously joyful. Then comes the phone call from a very insistent police officer. This phone call does not rupture Jeong-won's happy life, but it does cause a disturbance.

For all its highly dark material regarding shame and trauma "Way Back Home - 2019" is a surprisingly upbeat film. Jeong-won is upset about being reminded of her past life less because it was traumatic and more because in her mind she has long since moved on. We see her resist the idea of being identified as a rape victim because Jeong-won does not consider being a rape victim to be a critical aspect of her identity.

Shame doesn't come into it. Neither does anger. Jeong-won faces the reality of what happened with coldness. Her husband is more frightened of her than anything else because while in the earlier scenes of the film she was warm, loving, and responsive, once the past rape is established Jeong-won shuts down completely. She preemptively judges her husband because she is convinced he is judging her, even though he isn't.

The police based portion of the story is minor compared to this emotional journey. You may have noticed that I mentioned Jeong-won's uncle's carpentry shop. Her more direct relatives don't make an appearance until some time later, but when they do, we can see how past events have influenced Jeong-won's current day mindset. Jeong-won starts to see it too, and we can see by the complexity of her expression that Jeong-won is not so unaffected by past events as she would like to believe.

Jeong-won herself, much like us, overemphasizes the grisly aspect of the rape as being the seminal event in her life rather than the immediate reactions to it. Jeong-won is right that the rape does not define who she is- but by clinging to that ideal so stubbornly, Jeong-won is ironically enough unable to totally fulfill it. By rejecting the relevance of the rape Jeong-won has incidentally rejected the importance of love in her life. That's the far more significant void, as the rape charge itself is eventually demoted to the status of an ancillary subplot.

That's how "Way Back Home - 2019" beautifully covers the idea of rape survivorship from an unexpected angle. Jeong-won is the center of the story here- not the rape. Jeong-won is what matters. The people in Jeong-won's life are what matters. For all its darker overtones "Way Back Home - 2019" has the surprisingly strong sentiment of a soft-spoken understated love story, as we see its characters plan for the rest of their lives, coming to peace with the past, choosing to think in terms of appreciation for the best in life rather than regret for the worst of it.