[HanCinema's Film Review] "We Are Brothers" 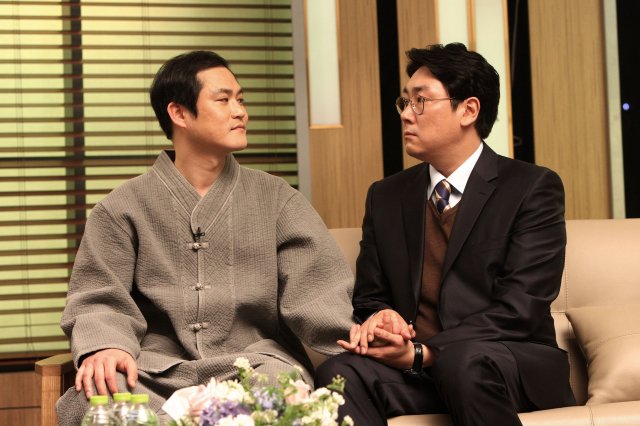 The action in "We Are Brothers" is prompted by a documentary program regarding reuniting families. The subgenre of sentimental television documentaries is unremarkable in South Korean culture, although the seeming wackiness does no favors for the drama in translation. Much of "We Are Brothers" lurches from one wacky setpiece to another. Surprisingly few of these weird situations have much to do with the main premise. Sang-hyeon (played by Cho Jin-woong) is a pastor rasied in the United States. Ha-hyeon (played by Kim Sung-kyun) is a shaman raised in South Korea. And now the separated brothers meet again.

It's not hard to guess why the theological underpinnings of "We Are Brothers" are so underdrawn. Screenwriter Bae Se-yeong clearly doesn't know much about the day-to-day lives of pastors or shamans, and decided to focus on absurd situations instead. Which, to be fair, is the right approach when you're making a comedy film. Bae Se-yeong also wrote "Extreme Job" which is the best performing South Korean comedy film of all time, and it is by no means a case study in proper police procedure.

All the same, the scattershot nature of "We Are Brothers" renders it very hit and miss. The strongest storyline, by far, concerns the wandering of Seung-ja (played by Kim Young-ae). The senile mother of the brothers, she successfully wanders out of the recording studio and into other bizarre places, going on a dreamlike odyssey throughout South Korea with surprising satirical dimensions. Kim Young-ae gives the performance of her career in demented deadpan, and it's a shame the whole movie isn't about her misadventures.

Which isn't to say that Cho Jin-woong and Kim Sung-kyun are bad, they just don't have much to do except look for their mother. There's a running commentary about how Ha-hyeon resents his older brother for running off to the United States. Eventually, through the framing device of biographical tapes produced for the television documentary, this situation is shown to be a bit more complicated than Ha-hyeon's assumptions. The story is sweet, although a bit forced since we're literally told about rather than shown the brothers reconciling.

Far more on-brand are goofy, hopelessly specific cultural jokes regarding such facts as the uncreative names of the brothers, or how people keep incorrectly guessing that Ha-hyeon is the older brother because he has a more aggressive personality. The brothers also play off well with minor characters, nearly all of whom react naturally to the generally absurd situations they're presented with.

There's a lot of good individual bits in "We Are Brothers" but overall this is a movie that's less than the sum of its parts. The story needed a better focus, or possibly a more consistent one, or maybe even just a better sense of synergy between the storylines. Even though the whole plot is driving toward a reunification between the brothers and their mother, their final dramatic meeting is surprisingly lukewarm. It's not like there's any other scenes where they're interacting, unfortunately. Still, the erratic structure at least makes for an intriguing break from formula.

"[HanCinema's Film Review] "We Are Brothers""
by HanCinema is licensed under a Creative Commons Attribution-Share Alike 3.0 Unported License.