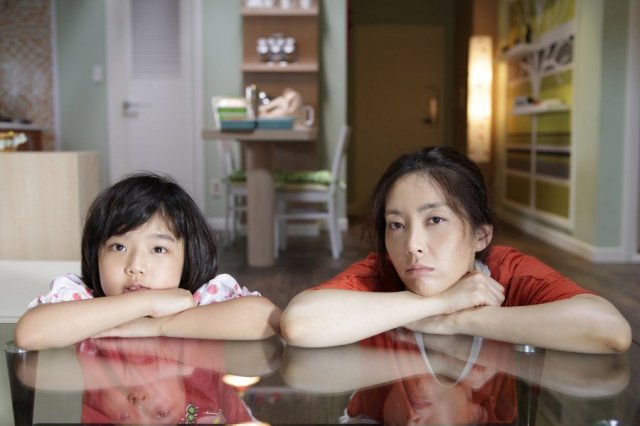 Go-eun (played by Song Yoon-ah) is a wedding dress designer. This actually isn't as important to the overall story as the title implies, as "Wedding Dress" is overwhelmingly the story of Go-eun's relationship with her daughter So-ra (played by Kim Hyang-gi). Given the time period in which this movie was released, and Go-eun's peculiar behavior until we learn the actual premise, you can probably guess that "Wedding Dress" will be going somewhere sad.

It's a shame that a basic synopsis of "Wedding Dress" makes the movie sound so rote. The movie's actually one of the best melodramas of its era. "Wedding Dress" is anchored largely by Kim Hyang-gi, who even as a child demonstrated such tremendous subtlety and talent as an actress it's little surprise that she's bloomed into one of the greatest performers in South Korean film in spite of her young age and seemingly limited range in the form of her usual passive roles.

Even beyond Kim Hyang-gi "Wedding Dress" takes place in a well-realized world. We don't really see directly how Go-eun acts in regular day-to-day life. We can tell she's acting strangely because of the suspicious ways other characters regard her as well as Go-eun's evasive responses. The dynamic works best witth So-ra, as well as it should with their relationship in focus. However, writ large the nuance is elevating. We see how Go-eun's varying friends and family members respond to the bad news individually even as they all have the same basic emotional arc.

Ji-hye (played by the recently departed Jeon Mi-sun) is the best of the rest in this regard, playing Go-eun's fraternal sister-in-law. In her role as a housewife, one might expect Jeon Mi-sun to be perfunctory. Instead, her demure, supportive demeanor speaks volumes simply by being non-confrontational. In exactly one scene we see this attitude drop, as Ji-hye loses her temper and drops a lifetime's worth of suppressed emotions into a powerful moment that shows how Ji-hye will always be Go-eun and So-ra's greatest advocate.

This scene, like so much else in "Wedding Dress" is critical because beyond just the ambivalent sadness felt by Go-eun and So-ra, the real conflict is just, what happens next? Go-eun and So-ra worry about each other, and what they come to appreciate over the movie is that they need to worry more about themselves. While So-ra gets by in relative isolation, she starts to realize that her moping antisocial attitude is making Go-eun panic. This, even as So-ra herself as well as other characters don't necessarily think it's that big a deal.

"Wedding Dress" is a story about making yourself happy to make other people happy. It's not a very intuitive idea. Which, of course, is why it takes Go-eun and So-ra so long to come around to it. I only really appreciated this arc once it became clear that Go-eun and So-ra themselves realized this was their real communication barrier. Thankfully, overall conflict is kept to a minimum in this regard. Neither Go-eun nor So-ra are malicious. They're just scared. And that's OK.