[HanCinema's Film Review] "When A Man Loves A Woman" 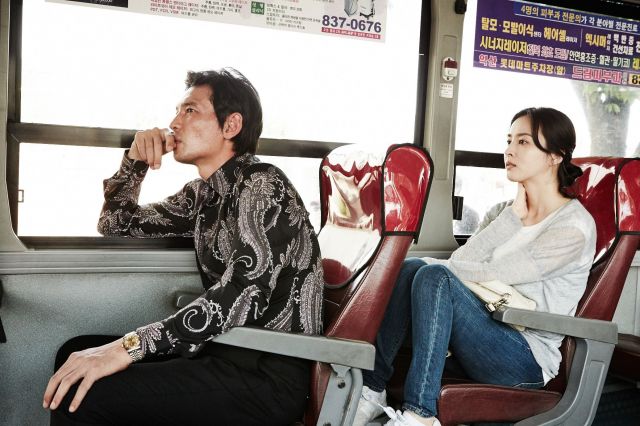 Tae-il (played by Hwang Jung-min) is a gangster. No, this is not a gangster movie- the main character just happens to be a gangster. It took me awhile to get past this stumbling block in the plot. For most of the opening salvo of this movie, Tae-il just does boring everyday gangster stuff like hassling people for payments, with no hint of a broader crime-based storyline. All that really happens long term are his awkward come ons to Ho-jeong (played by Han Hye-jin), a woman who for some time regards him with base hostility.

As a love story, this is wholly unconvincing. And that's entirely where the appeal of "When A Man Loves A Woman" lies. In real life, love stories are never convincing. There's no grand sweeping romantic gestures- just spending increasingly longer stints of time together until something more manages to come out of it. Relationships are fickle things that can be ruined by the most inconsequential arguments. Bigger problems can pop out to be sure- never foreshadowed, yet always an obvious presence.

The film treats Tae-il's gangster lifestyle with the same uninteresting breadth. It's never clearly explained what the gang's broader activities are and how Tae-il's function relates to them. He's just a collector, an enforcer who doesn't question orders and is rewarded for his efforts with good pay and protection from the legal system. There's no sense that Tae-il can really quit the gang life. It's not a matter of choice or fear- rather, his life as a gangster is an extension of his self, and this isn't a part of him that can be easily shifted to another job.

Which, as well, is an extremely human one that transcends his profession. Pay close attention to Tae-il's non gangster family. His brother's just a barber. But they all have that same basic sense of aggressive attitude, a lack of verbal input, and yet with all that a clear desire for intimacy. These are all very human characters, with their own small foibles that never really rise up to level of cinematic quality- and yet there's an empathy there that really makes them appreciable as fellow human beings.

It's difficult to recommend "When A Man Loves A Woman" in the grand sweeping vein of cinema spectacle, because the narrative doesn't connect on that level. But then it's not really supposed to. Near the end Tae-il makes a final request. And what he asks for is remarkable- this man has never been good with words, always much more at home with the strength of his fists. He was always paying attention, though. He really was thinking of Ho-jeong, even if on so many occassions we in the audience were never really sure about that. It's a heartbreaking moment, and a strong reminder how to an outside observer, there are means of love that go beyond the standard tropes of filmmaking.

"When A Man Loves A Woman" is directed by Han Dong-wook and features Hwang Jung-min, Han Hye-jin and Kwak Do-won

"[HanCinema's Film Review] "When A Man Loves A Woman""
by HanCinema is licensed under a Creative Commons Attribution-Share Alike 3.0 Unported License.