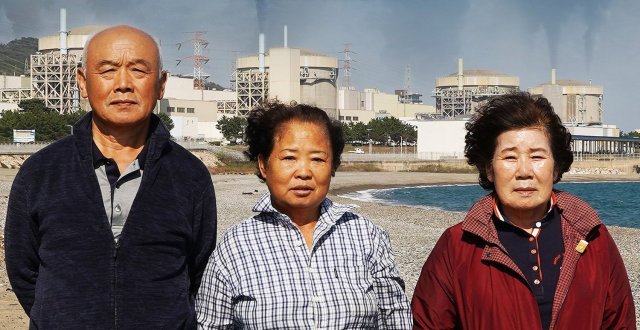 The Wolseong nuclear power plant system is located in the outskirts of Gyeongju, in the southeastern part of South Korea. It's only one of many nuclear power plant systems that provide much of the country's electricity. In "Wolseong", directors Kim Sung-hwan-II and Nam Tae-je detail activism on the part of Gyeongju locals to shut down the plants. The main argument they present is that radiation from the plant is leaking into the water supply, giving them cancer.

That's a serious charge that needs to be backed up with evidence. But strangely enough "Wolseong" never really gets that far. In a particularly bizarre twist "Wolseong" actually manages to aggressively undermine its own argument with nature documentary style footage of Gyeongju. It's quite easy to get lost in the movie's visuals of generally idyllic looking farm life only to snap back with, oh right, they're talking about how dangerous it is to live in these farms. Because of the cancer.

I thought a lot during "Wolseong" that if these people really want to leave their farms so badly I'd gladly live there. It's hard to understate just how nice these homes look. The cows have plenty of clean walking space. There's a herd of cute wandering goats. The food prepared with fresh ingredients straight from the field looks delicious. I couldn't help but feel like the directors of "Wolseong" mostly work in public interest documentaries and never really noticed how inappropriate this imagery is in a political format.

This is especially true because "Wolseong" doesn't present an actual convincing argument that the nuclear plant system is causing health problems. The closest we get to a specific example is one family where three members all got the same kind of cancer. This sounds bad until you remember that cancer is hereditary, and how in between boosted life expectancies and improved medical care it's entirely possible that cancer used to be undiagnosed and that's the main reason why it seems to be spiking.

Effective science is needed to make "Wolseong" work as a persuasive piece, yet the interviews with scientists here are very minimalistic. In one scene that's telling in an entirely unintended way, a scientist presenting a big complex lecture explaining why nuclear energy is safe is dismissed out of hand by the elderly persons attending his lecture, many of whom quickly file out the door without even bothering to listen to him. We don't see anywhere near enough of his presentation to understand which parts were so outrageous.

The real shame of this documentary is that nuclear safety is important, and demanding accountability in this regard is good. But it doesn't seem like any means exist by which the concerns of these protestors could be satisfied. At one point we're expected to see a pro-nuclear public service announcement as disgusting propaganda because it...uses overly sing-songy musical direction. Of course, in practice, the sound for these public service announcements is never actually used, which is why they have subtitles. That kind of obviously relevant context is never used here.