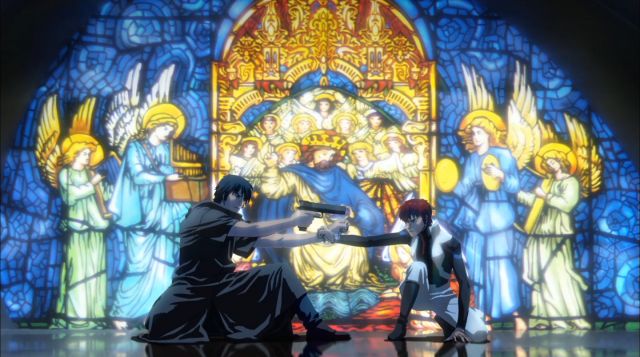 In the Spotlight this Week: Kim Moon-saeng's "Wonderful Days"...

Korean animations seem to embrace a cosmopolitan creational philosophy, bending and blending themes, styles and various aesthetics to arrive at exciting pastiches of exciting possibilities. In recent years, Korean cinephiles have been treated to an increase of intriguing efforts that have boosted the buzz around the South's potential for animatic awesomeness. Whether it be the lurid and family-friendly fables found in "Leafie, A Hen Into The Wild", the dark morality and cynicism of "King of Pigs" and "The Fake", or the fantastical adventures of "The Satellite Girl and Milk Cow", Korean animations continue to rise, challenge, and explore the form and function of Korea's animated aspirations.

It's true that Korean animations appear to lack a distinct aesthetic, drawing on, in particular, Japanese, French, and American styles and pictorial presentations to mould their magic around. Besides the auteuristic apparitions of Yeon Sang-ho, a relatively recent talent who has quickly established himself as a morbid magician in his own right, Korea's animated output--if it is indeed necessary to compare--unashamedly attempts to stand on the shoulders of giants: jumping from one to the other as these herds of heritage march on with or without them.

Indeed, there has been a lot of recent success for animations coming out of Korea, but not all have been stunning. A lot of Korea's clones have been born bug-eyed and drooling: sickly simpletons that have paved the way for future developments by supporting the vanguard and letting the fitter flicks overcome the genre's stunted stimulation. Perhaps then Korea's lastest succssors stand less atop titans than a totem pole of mediocre midgets. In any case, arguably one these curious steps came in 2003 through Kim Moon-saeng's sci-fi action piece "Wonderful Days"--a promising picture with a distinct (although two-toned) Japanese style, with but a pinch of Korean spice to keep the flavour recognisable.

Combining photo-realistic computer-generated imagery and the more classic cell-style animation, "Wonderful Days" (aka "Sky Blue") is a Frankenstein feature that both charms and repels with its stunning settings and rushed caricatures. It's the year 2142 and, like last Bong Joon-ho's futuristic extravaganza "Snowpiercer", mankind has forsaken the Earth's habitable biosphere. And like the 'divine' and perpetual engine found in "Snowpiercer", salvation in "Wonderful Days" takes the form of a man-made environment that nurtures only a few of its residents while the majority slave away in service to the system.

Instead of a locomotive, Kim's vision of dystopia is of a sleek city called 'Ecoban', a technologically advanced habitat that generates its precious power by harvesting soiled carbonite from outside its sanitised perimeter. Naturally, the oligarchies that reap the reward of this fortunate fortress are dependent on the manual labour and toil of tens of thousands of miners who live in the acidic wasteland surrounding the pollution-free palace. However the energy of levels of Ecoban are dangerously low, forcing those in command to make unreasonable and risky demands of the miners in order to maintain this second shot at life their ancestors gave them. But the oppressed have reached their limit, and a fallen aristocrat living among them has plans to bring down the emerald city they all serve.

Once one of the lucky souls who dwelled within the gates of Ecoban, Shua, a strangely nihilistic knight, has been making plans to infiltrate and destroy Ecoban's core. Before he attempts his mission, this handsome fallen angel sneaks into the titanic city to assess the health of mankind's hearth. His disguise for this inflitration mission is a traditional Hanhoe mask, specifically the Yangban (the 'aristocrat'), a wonderfully appropriate choice as Shua was once a royal resident himself, but after a childhood betrayal he becomes a ghostly agent of chaotic change for the masses. Just before his daring escape he encounters a long-lost friend, Jay, with whom he once daydreamed of better world with. In light of the rising class struggle and desperation on both sides, the two childhood friends then have to confront their shared past in light of a volatile and pressing present.

It's not a tale that tickles originality with any conviction, and the predictability of their plight is rather frustrating and blinding. However, simpler tales have been spun before that managed to survive due to other, more formalistic, considerations and competencies. This, sadly, is where "Wonderful Days" composite curiosity fluctuates and cracks. Amidst the attractive architecture, snappy shifts in depth and focus, and adrenalised action, "Wonderful Days" presents us with crudely constructed characters, deadpan dialogue, and rising tensions that struggle for purchase. Dystopian dreams such as this also scream for some form of philosophical undercurrent: a food-for-thought foundation that adds unseen weight to events. Here, however, any meaningful drivers of thoughtfulness are discarded in favour of superficial encounters: squeaky narrative hinges that open to the next inevitable event. The result is a childish canter through a rich and wanton world to an uninspiringly matter-of-fact finale.

Stodgy dialogue and flat progression aside, stylistically "Wonderful Days" has a lot to offer, but is still half-baked and schizophrenically sutured. It is, despite this harsh criticism, progress that has yet been returned to, and possesses philosophical and stylistic promise that would benefit from introspection and revitalisation. The future of Korean animation is bright, almost blazing, and as this chapter of Korea's filmography fills up with quality it is important to take note and reflect upon recent creations that need not be quickly dismissed or abandoned. In Kim's weather-torn world there was still plenty of coal waiting to be pressured and cut into a real gem. And with any luck we'll see a return to this kind of ethos in the coming years as Korea marches on atop, potentially even above, the animatic giants that have paved the way for its cinematic coming.