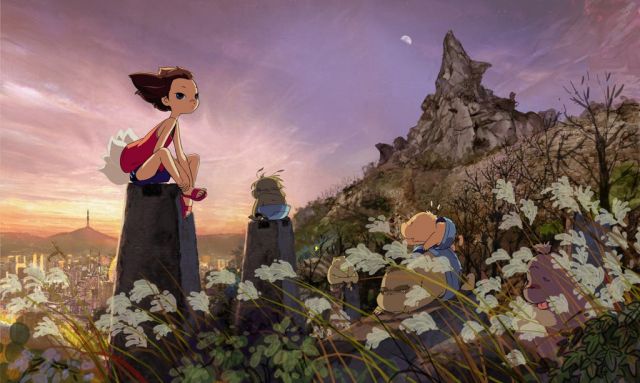 Yobi (voiced by Son Ye-jin) is a hundred year old fox spirit. She's spent most of her life living with a band of aliens who crash-landed into Korea. A sudden crisis forces her to interact with the children attending camp near the forest, and the outlook on her life seems positive. That is, until Yubi's goal in life is exposed- she must take a human's soul in order to become a human herself. Several other supernatural characters try to bully Yubi into submission on this point, while she takes stock of the one immediate goal that actually matters to her.

As you can see, there's a lot going on in this movie. And at under ninety minutes, "Yobi, The Five Tailed Fox" simply doesn't have the narrative strength to really tie all these disparate story elements together. It's difficult to feel much urgency about Yubi's soul-driven plot when so much of the conflict is taken up by the aliens worrying about getting exposed to humans. Or Yubi's own interactions with the kids at the camp, which lack urgency but are still fairly cute and precocious.

That might not be the best word actually- the children are, indeed, at camp because they have behavioral problems at school, but there's refreshingly little cloying behavior among them. They all have dreams and desires, but these are just kids. They only have a very vague outline of what they want in life. It's easy for them to feel hurt and not really do a good job talking about it, thanks to their general life experience. I very much enjoyed how the kids (and Yobi) come off as shy, insecure, yet clearly desiring more confidence in life. Most of the movie's best scenes are just them working up the courage to be more active- whether it be in telling secrets or escaping monsters.

While the fantastic elements aren't that well-integrated into the story, the visuals are excellent. Multiple action sequences prove wild and imaginative. Even when the solution to a problem inevitably ends up being some sort of magic, the rules of "Yobi, The Five Tailed Fox" are fairly well defined. The movie's general sense of chaos translates well into spectacle. Yubi has a lot of fun being energetic and outrageous, so that even when she's not on screen the tone is always encouraging, and the animation fairly dynamic.

The aliens are the overall weak point, rendering the storyline just convoluted enough that the synopsis sounds really ridiculous even if the story itself is fairly down-to-earth and relatable. They talk fast and repetitively and fight constantly- it's easy to see why Yobi doesn't have much patience for them anymore. And that's really the only thing that makes the more alien-centric sequences bearable. The movie is pretty up-front about the fact that the novelty of hanging out with aliens wear out fast, so it's no wonder why Yobi wants new friends.

There's a seriousness in that kind of general tone that's actually quite admirable. The kids in this movie just want to have fun and be happy. It's such a simple goal but ithe difficulties can prove to be quite formidable. It's a pity the whole film couldn't keep this kind of metaphorical attitude up consistently. Still, "Yobi, The Five Tailed Fox" is dynamic, cheerful, and isn't condescending. It may not be a great movie, but it's got enough good qualities to make for a decent recommendation.

"Yobi, The Five Tailed Fox" is directed by Lee Seong-gang and voiced by Son Ye-jin, Gong Hyung-jin and Ryu Deok-hwan