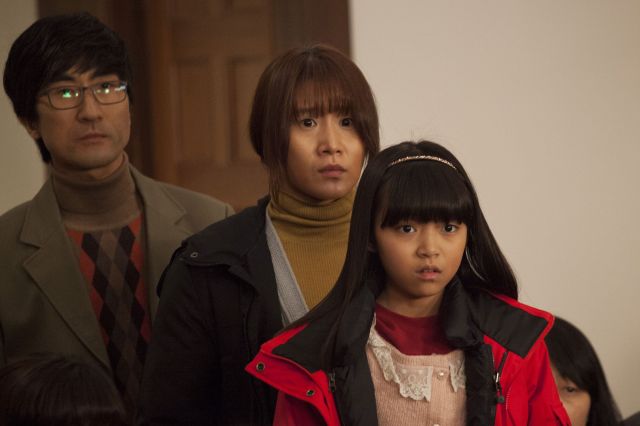 From the very beginning "Yoon Hee" sets out to establish an atmosphere of general depression. The titular character (played by Gong Na-na) starts out in China, where a rather discouraging series of events ensues involving brutalized prisoners, food idly tossed upon the ground, assault, sharp objects, and hideous screams. "Yoon Hee" is a film determined to let its audience know that nothing fun will happen.

This opening piece is passable in terms of setting tone. However, the longer "Yoon Hee" goes on, the more clear it is that this isn't so much an actual narrative as it is a series of sad discouraging events. I was able to give the film the benefit of the doubt for a while, but when the only message the movie gives off is that life generally sucks, I started wondering just how true to life any of the events in the story were.

Let's take the main dramatic impetus for the film, the case of insurance fraud wherein our heroine is victimized. Our lead character is a North Korean refugee whose job is to deliver milk on a scooter. She is about the last person in the world for whom an insurance fraud scam makes any sense- you can't squeeze blood from a turnip. The victims of such scams are almost always people with cars, because people who own cars are much more likely to have money. Granted, perhaps the people victimizing her are just really incompetent scam artists- except that this storyline goes on for several months. After that much time has passed, it should have occurred to the scam artists that this was actually a pretty stupid plan for trying to make quick cash.

Indeed, the movie suffers a lot by putting too much emphasis on the scam artists- on all the duplicitous people in Yoon-Hee's life, really. None of them come off as genuine characters- they're just bullies trying to extort as much money as they can, all for the sake of turning Yoon-Hee into a suffering martyr. The problem with this is that piling all these negative events on top of each other only succeeds in making the film's title character a victim of the script- none of these events feel genuine or believable at all.

The surrogacy storyline is another good example. As far as I can tell it's only in the movie because being pregnant makes Yoon-Hee more of a martyr and also makes her persecutors look more mean. But the entire situation just begs more questions- where is she getting the money to put on weight? Who is she even being a surrogate for? These points are never answered, because they're irrelevant to emphasizing the woman's suffering.

The ending especially makes it all too clear just how artifically constructed every conflict in the movie is. We have the big courtroom scene, with the big courtroom dramatics, even those goofy little musical chords- and getting to this moment is unbelievably frustrating because it's just impossible to believe there was any good reason for "Yoon Hee"'s set-up to be this convoluted and deliberately scripted. There's just no legitimacy to the denoument- and the sudden random resolution of yet another barely discussed subplot designed largely to emphasize Yoon-Hee's suffering only makes these matters worse. "Yoon Hee" is a major disappointment, as it resorts to cheap emotional theatrics at the expense of any kind of worthwhile message.